Captain Blackbeard, known as Captain Kurohige (キャプテン・クロヒゲ, Kyaputen Kurohige) in Japan, is a member of WWW from Mega Man Battle Network 6. He is an animal trainer. His NetNavi is DiveMan.EXE.

Blackbeard is a very cruel, selfish and arrogant man with little concern of others' well being. He harshly mistreated animals with dangerous practices, justifying them as a "show" or "entertainment" for the audience, when it was pure violence.

Not even humans are safe from him as he unleashes all the animals from Aquarium, including life-endangering ones like alligators, sharks and piranhas to run amok and feeling amusement at what it felt people running for their lives, showing he is utterly sadistic to both animals and human alike.

He greatly dislikes opposition as he was infuriated when the Director fired him for his violence and when Lan stopped his plans, becoming increasingly more aggressive. Similarly, he also threatened Prosecutor Ito for going back on the deal when he had him punished for his selfishness, due to being led to believe that he was supposed to be found not guilty.

Blackbeard was an animal trainer, although he was especially cruel and harsh to the animals, feeling it generated a lot more excitement. Several things he put the animals through included having the dolphins jump through rings of fire and having the elephant seals lift hundred ton weights. It's because of this treatment of the local animals that one of the penguins, Plata, fled from the aquarium.

He first appears outside the aquarium of Seaside Town, having been fired for cruelty to the animals. As revenge, he then hacks into the aquarium's network and releases all the animals, creating a huge panic, and thus also creating a show that he feels is a good one. However, Lan and MegaMan defeat him and return all the animals to their cages. Blackbeard then runs away and takes Mick hostage. But, the timely arrival of an elephant seal with the lead of Plata the penguin holds him down until he can be arrested.

He stands trial in Green Town and is found guilty (from Lan's testimony) and is sentenced to the punishment room for an indefinite time; although, he threatens Prosecutor Ito citing that wasn't part of the deal (implying that Ito was supposed to have him found not guilty). He is later released, and along with Joe Mach, uses BlastMan and DiveMan to kidnap Roll, GutsMan, and Glyde to lure MegaMan to the Undernet. They are defeated, but MegaMan is also captured. Blackbeard joins Ito, Vic, and Yuika in splitting from the WWW and attempt to use MegaMan for themselves. In a meeting with Mayor Cain, he is discovered by Lan and they attempt to kill him when Chaud arrives and arrests them both.

Captain Blackbeard and Yuika live in Beyondard and initially work for the Gregar army under the orders of Zoanoroid DarkMan. They administer a castle that serves as the control center for a dam, thus blackmailing the village at the dam's foot for their water supply. They also imprison all that try to stand up to them. One of the prisoners held there is Iris, who was brought there by Zoano DarkMan.

By dumb luck, Dingo manages to infiltrate the place and then finds Iris. Yuika and CircusMan try to stop him, but, luckily, Lan Hikari and Raika made it to the scene as well as Zoano DarkMan. Iris then fuses Trill with MegaMan to defeat Zoano DarkMan. That provokes a hole to break open in the dam, and Blackbeard and Yuika escape aboard DiveMan.

Later, they are hired by the Beyondard's version of Dr. Wily in order to locate Trill. They manage to do so, and DiveMan captures him in the midst of a skirmish between Gregar and Falzar. He brings Trill to Wily, who then uses him to fuse with the Super Cybeast.

In the meanwhile, he and Chirol make a run for it in an aerial vehicle, but Dark Scythe puts a bomb inside, which causes them drift into the Fossa Ambience that is open in the sky and crash-land in Earth.

Captain Blackbeard and Yuika from Beyondard appear in episodes 7 through 10 from Beast+. They are lost in Lan's world and form an alliance with BubbleMan. They steal several toys from AyanoTech and other objects to try to create their own CopyBots. They start with some rather stupid and useless "MiniBots", then manage to do some decent CopyBots for their Navis, but Lan defeats them by taking advantage of the low quality of the CopyBots. They later manage to create a giant CopyBot. DiveMan and ClownMan enter the CopyBot at the same time, and the two Navis combined into one, but they are defeated by R Lan and R ProtoMan by exploiting the only weak point of the CopyBot and making it swallow bombs.

When they meet with the Wily in Lan's world, they try to convince him to help them, but he refuses. Learning about the Synchro Chips by seeing Dusk they try to negotiate with Wily the devolution of his own Synchro Chip. They steal the Chips to use Cross Fusion, but these Synchro Chips are in truth prototype Reverse Synchro Chips, which causes them to Cross Fuse into the Cyberworld. Not realizing at first that they are in the Cyberworld, Blackbeard attempts to seek revenge on Lan. After humiliating himself on Mayl Sakurai's widescreen television, he and Yuika continue to wander NetCity and encounter AquaMan. Unknown to them, their lives are susceptible to the dangers of the Cyberworld, but are saved by the combined efforts of MegaMan, ShadowMan, and Dr. Wily. Blackbeard is later sentenced to work at and aquarium along with Yuika by Dr. Wily (oddly enough, the interior of the aquarium is nearly identical to the aquarium in which he tried to take over in Battle Network 6) in order to "understand what the rules of this world are". Blackbeard swears that he will get at Lan one of these days before a seal jumps on top of him. He is not seen again. 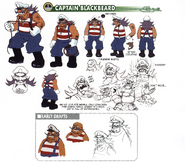 Retrieved from "https://megaman.fandom.com/wiki/Blackbeard?oldid=309525"
Community content is available under CC-BY-SA unless otherwise noted.