"This is a short-range arm-mounted weapon... It's probably best used when you get in trouble and are surrounded by enemies."
—Roll Caskett

In Mega Man Legends the Blade Arm is a strong weapon that performs a single slash. When its Range is upgraded, the blade releases a shockwave in the direction Mega Man is looking (it can be aimed to attack up and down), allowing him to hit and damage enemies in a short distance. However, the Blade Arm has a slow firing rate and has a limited usage.

In the second game, the Blade Arm does a three hit combo, swing wide, swing wide, jump - slash down. Though the shockwave it disperses is lost in the second version, the length of the blade is much longer when fully upgraded compared to the first Blade Arm, and can be upgraded to infinite usage.

The Blade Arm contains a glitch in Mega Man Legends 2. If it's unequipped during the third slash, Mega Man will be able to walk in the air until he jumps or is knocked down. 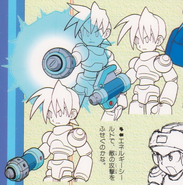 Concept art of the Blade Arm and Shield Arm from Mega Man Legends.

Mega Man using the Blade Arm in Mega Man Legends 2.
Add a photo to this gallery
Retrieved from "https://megaman.fandom.com/wiki/Blade_Arm?oldid=291302"
Community content is available under CC-BY-SA unless otherwise noted.