The Blade Armor appears to evoke a proper warrior theme for its aesthetic, with the use of framed pieces to emphasize a more auxiliary and worn feeling than the more futuristic fusion and sleek designs of past armors. Its most prominent characteristic would have to be its green "power crystals" that are found on joint areas, like the shoulder and knees, and on its solar plexus, while with gold details that stack up vertically by anatomy, including its helmet crest, and the hand guard like fins on the X-Buster resembling a bow, and that opens up and locks into place upon the Z-Saber's usage, resembling a sword hilt. Alternately, the Blade Armor appears to take inspiration from X's first armor and the third armor, the former its simple yet standout color scheme of mainly blue and white, while taking the subtle samurai inspiration of the latter to a more pronounced meaning. Significantly, both also come from installments that deal with X's growth in power and development as a warrior, and together with Zero, whom he looked up to as a leader during his early days as a Maverick Hunter, which may further reflect its inspiration.

The Blade Armor focused on mobility and using the Z-Saber, which is now physically adapted into X's buster by its features, rather than a separate entity. Hence, the Blade Armor's most significant feature is its emphasis on literal augmentative upgrades and skillful strength by wielding them masterfully. The X Buster acts the same, yet as with all armors, the armor's charged shot can differ. Normally firing the blast will produce a plasma projectile, similar, albeit smaller and weaker, to the Plasma Shot of the Force Armor/Ultimate Armor, but if Up is held, X will attack with an upgraded Z-Saber slash that covers a wider range than a normal Z-Saber slash and can destroy certain enemy projectiles when slashed; X will also not move while in mid-air and when clinging onto walls when he uses this move. The Blade Armor's Giga Attack is a very large slash which produces two giant waves of energy. The waves become more powerful when hit from a distance.

The Blade Armor's mobility feature is an upgraded air-dash called "Mach Dash". If the jump or dash buttons are pressed while X is airborne, X will freeze in mid-air until the player releases the button or after about five seconds from holding it down; after this, he will perform a quick air dash that covers a lot of distance, has invincibility on start-up, and damages enemies upon contact. X can air-dash horizontally as well as vertically up (a returning feature from Mega Man X3) and down.

There's a glitch when using the Guard Shell that increases the charged buster and saber power dramatically but just within the shield's range. Also equipping said weapon increases the damage output while using the Mach Dash, but only at the beginning.

Note: Specific parts do not have effects as this armor can only be equipped when complete.

Ground Scaravich: This Capsule can either be the most frustrating to find, or a cake walk. It is hidden in one of the random totem poles. Upon landing in the correct area, the capsule is visible right away.

Shield Sheldon: The Hyper Dash part can be very useful for obtaining this Armor part and can be reached with Zero or X's Falcon Armor. Heading down to the teleport portal which leads to the secret boss room, there will be an area with spikes. In this area, next to the wall, is an invisible opening. Going through here there is a floating reploid that can be rescued. The capsule is located to the left of the reploid. X or Zero can reach it without the Hyper Dash part by jumping onto the middle of the gap between the wall and the ledge where the capsule is to land on an invisible platform before jumping left to reach the capsule.

Infinity Mijinion: This capsule is the easiest one to find. Upon destroying Illumina, a portal will appear. Jumping into the teleporter and going to the left will bring the player to the capsule, as well as a heart tank.

Commander Yammark: Right after dropping into the first underground area, there is a visible opening in the wall, right behind the Nightmare Insect. The capsule is located there. 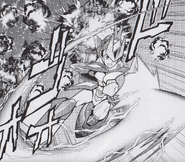 Mega Man X equipped with all weapons in the Blade Armor from Mega Man X6.
Add a photo to this gallery
Retrieved from "https://megaman.fandom.com/wiki/Blade_Armor?oldid=355892"
Community content is available under CC-BY-SA unless otherwise noted.