Deals damage to the entire party.

Summons one Bladey for backup.

Attacks a single target(only used when in “Berserk” status)

Blady (ブレーディー, Burēdī), known as Bladey in Mega Man X: Command Mission, is a bladed, wheel-type Mechaniloid. Bladys first appear on screen with their blades hidden, but when X shoots at them, they reveal their blades and spin towards him.

In Mega Man X: Command Mission, they appear in groups in the Melda Ore Plant and have a very high evasion rate. Run away when alone. A broken Bladey can be found in the Grave Ruins Base and used in the Deployment Center.

A Blady is among the Maverick minions attacking the Neo Maverick Hunter Base. One Blady appears catching X during his fight with Crush Crawfish. Another one is seen with the Mavericks fighting Neon Tiger, Volt Catfish, Tunnel Rhino, Blast Hornet, and Blizzard Buffalo. 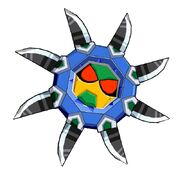 Bladeys as they appear in Mega Man X: Command Mission.

Retrieved from "https://megaman.fandom.com/wiki/Blady?oldid=277473"
Community content is available under CC-BY-SA unless otherwise noted.