Blast Man (ブラストマン, Burasutoman) is a Robot Master who appears in Mega Man 11. He is a volatile robot with a flair for the theatrics and a taste for explosions. He was originally manufactured by B.B. Bomb Company to use his bombs to provide explosive special effects for movie studios and theme parks. While under maintenance by Dr. Light, Blast Man was captured and reprogrammed by Dr. Wily to help him conquer the world and fight against Mega Man. Blast Man's Special Weapon, Chain Blast, creates floating explosives that detonate after some time; they can also be combined for a more massive burst.

Blast Man's stage is set in the ruined remains of a theme park and movie studio hybrid that he has shaped into his personal playground. He's added several personal touches, including a number of signs featuring himself as the star of “Blast Man Adventure.” [1]

Blast Man is a tall, slender humanoid robot with a black skin-tight body suit that is covered in blue and red armor. His waist is covered with a red belt. Blast Man also has red "hair" consisting of six spikes that stick out from the back, giving it the appearance of a bomb explosion. In addition, Blast Man has grey/green knobs covering parts of his body armor. Two larger knobs are placed on his helmet and attached by a metallic strip, which resemble headphones. Blast Man also shows a sinister grin to reflect his insane and unstable nature.

Described to be dangerous, volatile, and a bit short-tempered, Blast Man is fond of explosives and uses his bombs to create them for his own enjoyment. He also has an egotistical and narcissistic side, as seen when he places images of himself all over his stage. While not creating explosions in his theme park, Blast Man fancies himself as a skilled journalist, writing an article for a magazine, Boom Monthly (月刊発破時代, Boom Monthly). However, he must be careful not to blow up his written works into bits.

Blast Man hops around the room while slinging explosives everywhere in his attempt to destroy Mega Man. He usually alternates between lobbing several bombs in an arc while standing still and jumping high up to chuck bombs downward. Sometimes he'll also jump around Mega Man and hurl a bomb right at him, kind of like Bomb Man. Occasionally, Blast Man will use his Special Weapon, Chain Blast, to spawn four floating bombs which will gravitate towards Mega Man and explode after a few seconds.

When Blast Man is low on health he'll tap into his Power Gear, increasing the size of his bombs and giving them greater explosive force while his attack patterns become more erratic. After defeating Blast Man, Mega Man obtains Chain Blast.

In the Superhero difficulty, Blast Man can activate his Power Gear much earlier in the fight, as well as being able to execute his aerial attack twice during the same jump.

Blast Man is a pyrotechnician (or in his words, an explosion artist) who designs the explosive effects for movies and theme parks. He can provide any explosion the client needs, from cataclysmic blasts to shy little bangs.

At the time of the Wily incident, he was working on a new explosion-themed attraction for the theme park "Flower Land."

In his spare time, he writes a column for his favorite magazine, Boom Monthly. There's not a month goes by that his explosive opinions don't blow the pages to bits. 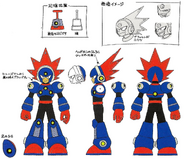 Retrieved from "https://megaman.fandom.com/wiki/Blast_Man?oldid=272820"
Community content is available under CC-BY-SA unless otherwise noted.