"Finally! I hate disguises! Much more of a smash-and-grab sort of gal. So nobody move!"
―Blasto Woman, Hard Times in Silicon City

Blasto Woman is a robot appearing in Mega Man: Fully Charged. She does not have a counterpart in the games. She is based off of a jet plane and was originally created to lift cargo before turning to crime for unknown reasons. Blasto Woman debuts in the episode Hard Times in Silicon City, in which she attacks the Museum of the Hard Age to steal its military weaponry, or rather, as she puts it, "at least the good stuff". She is voiced by Kathleen Barr, who also voices Hypno Woman.

Blasto Woman is a large yellowish-orange robot, with purple rockets and golden wings attached to her back. She also has knobs on her helmet that are attached to a metallic strip, resembling a pilot's cap, which is similar to the ones Blast Man has. She also has purple "hair".

Blasto Woman is a bit sarcastic, and she dislikes puns. She is pragmatic, especially when it comes to fighting; by her own admission, Blasto Woman heavily prefers brute force over strategies that involve disguises and deception. She is often obsessed with money and how much things are worth, wanting to retire to a hangar that fits her. She's implied to be older than other Robot Masters as she once told Mega Man to "respect your elders" when he fought her; she is informal about her age, though, saying terms like 'ma'am' doesn't suit her.

Despite turning on Lord Obsidian, Blasto Woman joins Skull Man's army of Robot Masters and is seen alongside Chaotique and Guts Man in a large army of robots. After Skull Man's speech, Blast Woman and the other robots begin to march toward Silicon City to conquer it and bring down Mega Man. Mega Man: Fully Charged (BOOM! Studios) Issue 1

Blasto Woman has rocket jets equipped on her back, enabling her to fly. In addition, her bulky frame gives her super strength, and she also carries a plasma gun.

Since Blasto Woman mostly relies on her jets for mobility, she can be rendered helpless if the jets are jammed. Mega Man did this once by leaping onto Blasto Woman's back and using Ice Man's schematics to freeze her jets solid, causing her to fall to the ground.  And Mega Mini once sabotaged Blasto Woman's jets by loosening the cap on her lube reserve, causing the jets to sputter out due to being overlubricated.

Blasto Woman, along with all the other characters, in the opening of Mega Man: Fully Charged. 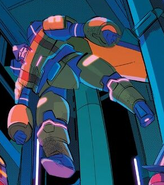