"You are strong compared to the others. I was bored because there is no strong Reploid left on the ground. Although I was not ordered to kill, it's too hard, isn't it? Hee hee hee."
―Blaze Heatnix, Mega Man X6

Blaze Heatnix (ブレイズ・ヒートニックス, Bureizu Hītonikkusu) is a phoenix-based Reploid and one of the Maverick bosses in Mega Man X6 who serves as one of the Nightmare Investigators.

Blaze Heatnix is a fiery orange Reploid with a phoenix-inspired appearance, possessing a beak, large wings, avian claws on his feet, and a long tail. Fire is constantly emitted from the back of his head and along his torso and shoulderpads. He has a rhombus-shaped gem on his forehead, like all of Gate's creations.

Blaze Heatnix was a very cruel and arrogant Reploid, who delighted in the destruction of those weaker than himself. He had a strong "might makes right" belief and enjoyed fighting, having waited for X to arrive for such a purpose. Oddly enough, he didn't appear to recognize who Zero was, or at least he didn't care.

Blaze Heatnix was specially designed by Gate with the ability to withstand extremely hot temperatures to search out subterranean hotspots, allowing him to freely explore those dangerous areas. Heatnix later became a member of a disaster relief team to help minimize damage from a chain of recently erupting volcanoes. However, because Heatnix was so much more powerful than the other members, he would ignore his coworkers (seeing them as weak and useless) in dangerous situations, disregarding them if they ran into danger, leaving all who fell behind to perish. As a result, Heatnix was eventually disposed of deep underground for his behavior.

Later, Gate recovered his body and revived him to use him in the Nightmare investigation, and sent him to the Magma Area, where he is fought by the Maverick Hunters.

Blaze Heatnix's primary ability is to fill up his battle room with purple magma, creating a constant hazard. To attack, Heatnix will fire off chunks of magma that break up into smaller pieces. He can also fire white hot blades of magma energy. As his ultimate attack, he will dash back a forth like a comet with a huge plume of fire surrounding him.

At this phase, as the magma is located under the feet. He will "dive" into the magma and "swim" around in it, and then try to jump up at the character's current position.

The magma will, however, levitate on the top half of the screen, which is against physics as it is a semi-molten rock. Blaze Heatnix will fly from one side of the screen to the other. Also, lava drops will fall down continuously at the holes.

??: Welcome! I've been waiting for you! You are strong compared to the others. I was bored because there is no strong Reploid left on the ground. Although I was not ordered to kill, it's too hard, isn't it? Hee hee hee.

X: You must be Blaze Heatnix...

Blaze Heatnix: Brainwashing Reploids is lame. Don't you think so? Let's fight to see who's the strongest!

Zero: It's too hot here. Let's finish this...
??: A vigorous guy! I've been waiting! You look so strong compared with the others. I was bored because there is no strong Reploid left on the ground. Although I was not ordered to kill, it's too hard, isn't it? Hee hee hee.

Zero: I'm not interested in your talk... Will you fight or not?

Blaze Heatnix was one of the many Mavericks revived by Sigma-1 while his Mechaniloid army was attacking the Sky Patrol. Recreated by the power of the Genesis Portals and Unity Engines, he then joined an army of Mavericks deployed by Sigma against the heroes and then in an invasion of various worlds. 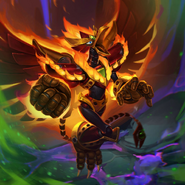 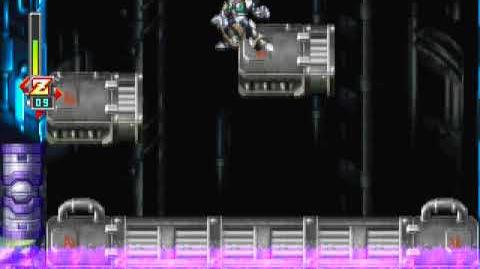 Retrieved from "https://megaman.fandom.com/wiki/Blaze_Heatnix?oldid=349889"
Community content is available under CC-BY-SA unless otherwise noted.