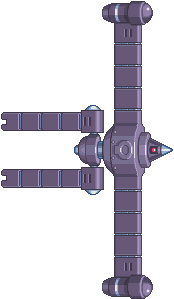 Bliking (ブリキング, Burikingu) is the boss of the second Wily Tower stage. It is a powerful combat robot created by Dr. Wily. Because of an emergency (presumably Mega Man), it was not given a paint coat. Bliking can only be damaged when its wings are fully extended. It attacks by releasing mines from its top, using six lasers from its wings, shooting missiles from its tail, and trying to ram into the player. It is vulnerable to Astro Crush.

Bliking has a brief appearance in Mega Man Gigamix volume 2. Shade Man released Bliking from the Hogale to attack the white giant that was pursuing Wily, but it was destroyed with only one attack. 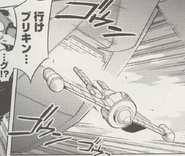 Bliking in Mega Man Gigamix
Add a photo to this gallery

Bliking may be a pun of "Blik", Dutch for 'tin plated', while without the "bli" all that is left is "king". With this in mind, the intended name meaning would appear to be along the lines of "Tin Plated King".

Retrieved from "https://megaman.fandom.com/wiki/Bliking?oldid=304154"
Community content is available under CC-BY-SA unless otherwise noted.