"Hmph. I am impressed you made it to this base. Still... I cannot dishonor Lord Weil, the man who brought me back. I'll just have to freeze you now."
—Blizzack Staggroff, Mega Man Zero 3

Blizzack Staggroff (ブリザック・スタグロフ, Burizakku Sutagurofu) is a Mutos Reploid from the Mega Man Zero series that appears to be based on a white stag. He is a ruthless Reploid from Fairy Leviathan's Deep Sea Squadron that enjoys painfully dismantling captured Resistance members under the guise of "questioning" them. The extremely low temperature produced by him can atomize anything, and can even turn oceans into blocks of ice. Blizzack is the boss of the "Find Hidden Base" mission in Mega Man Zero. He is resurrected by Dr. Weil in Mega Man Zero 3 as "Blizzack Staggroff R", and leads an army to attack the Resistance Base from the northern tundra.

In the first game, Zero needs to rescue some captured Reploids from the Resistance. After freeing all the captives, Zero battles Blizzack in the elevator to the shuttle bay to escape with them. Defeating him earns Zero the Ice Chip. Fighting him at A or S rank causes him to use Double Blizzard, firing icicles in his freezing blasts.

In Mega Man Zero 3, he has similar tactics from the first game, but he still buckles under the power of the Flame Chip.

Blizzack mainly attacks with ice cannons in his arms. He can freely fire ice projectiles at his foes or freeze them at will.

"Hmmmm...you must be Zero... You have done well to make it this far, but this is where your journey ends. I'm Blizzard Stagroff, the best warrior of Leviathan, the Guardian. You won't beat me! Get ready!" —First encounter

"Hmmmmmm. Outdated Reploid garbage. You should have remained in your place of rest... With my blizzard, you'll regret not staying there! Hmmmmmm! Time to go back to sleep..." —Second encounter

"Hmph. I am impressed you made it to this base. Still... I cannot dishonor Lord Weil, the man who brought me back. I'll just have to freeze you, now. Hmph." —Introduction

"Hmph. A century is not enough. This time, sleep forever!" —Victory

Blizzack appears in the Rockman Zero manga, where he is called "Staggnoff-chan" (スタグノフちゃん, "Staggnoff-chan") by Leviathan. He was causing trouble to a village, but is defeated by Zero with a rotating slash. After learning of his fate, Leviathan goes after Zero to avenge him. 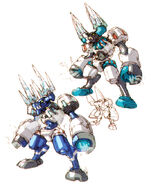 As a Cyber-elf in Dr. Weil's concept art.

Blizzack in the manga Rockman Zero.