Blizzard Buffalo, known as Frozen Buffalio (フローズン・バッファリオ, Furōzun Baffario) in Japan, is a bison-based Reploid from the Mega Man X series that was originally created for ski slope security, being designed from the ground up to operate in extreme cold. As result, Blizzard Buffalo is exceptionally well suited to snowy regions and he loves the cold, but he can't handle heat well. Despite his fearsome appearance, Buffalo is a gentle artist whose hobby is making ice sculptures. However, after being infected by the Maverick Virus in Mega Man X3, he now charges his enemies in a blind fury, smashing foes too slow to dodge. As a Maverick, he became part of Dr. Doppler's army and froze a residential area from Dopple Town, and had to be stopped by X, being another innocent victim of the Maverick Wars.

Like Flame Mammoth before him, his room is much larger than the screen, requiring the player to damage him while he's onscreen. When his health is depleted by 50%, Blizzard Buffalo shoots a very large ice beam that will freeze his target if it connects.

Blizzard Buffalo's attack patterns and boss fight strategy is similar to fighting Tunnel Rhino, charging forward most of the time and occassionally using other attacks.

However, there is a glitch with which he can be easily defeated.[1] Here are the basic steps:

In the Rockman X3 manga, during his Maverick rampage at the start of the chapter, Blizzard Buffalo had been battling X and overpowering him with his attacks. When he was about to skewer the Maverick Hunter with his horns, he was immediately stopped by a human boy named Toshihiko, who threw himself in front of the charging Buffalo, causing him to halt and suddenly grab at his own head in agony and leave. X was about to take aim to stop him, but Toshihiko insisted he stop and then took him to see a smiling snowman up in the mountains near the town Buffalo had been attacking. The boy explained that the snowman is something Buffalo helped him with; in a flashback, Toshihiko had made the snowman on his own but didn't like its expression because it reminded him that he made it alone, unlike the other kids. He was about to punch it in anger when Buffalo stopped him and simply changed the expression to a smile for him, which made Toshihiko happy that he had a friend help him. From that point, they ended up being very close...until Buffalo started rampaging wildly, leading up to the present. Even though Buffalo froze the entire town in ice and endangered innocent lives, Toshihiko never lost faith in his new friend. After a violent and drawn out battle with X inside an evacuation shelter, which resulted in a heavy hit in his head (to the point both his horns were broken), Buffalo returned to normal and realized what he had done. Buffalo requested X to end his life, feeling he could never atone for his crimes. However, the Maverick Hunter intentionally missed his charge shot and put a hole through the wall behind them instead, which allowed Buffalo to see that, just below, Toshihiko had been creating snowmen one after another the entire time so that he could reach out to his heart the way the Reploid had done for him earlier. The chapter ends with Buffalo and Toshihiko being together again, with X stating that Reploids can indeed understand humans because like humans, they have hearts.

Later, Blizzard Buffalo, alongside Blast Hornet, Neon Tiger, and Tunnel Rhino, are examined by Dr. Cain to discover what caused them to become Mavericks, finding Worms inside them. After recovering, the four assist X and Zero in their first battle against Bit and Byte. While X and Zero were fighting the Nightmare Police a second time, the four, alongside Volt Catfish, retrieved the four Power Up Parts for X and held back Dr. Doppler's army for Dr. Cain and Marty to send the Parts for X.

In the Rockman X4 manga, Blizzard Buffalo fought alongside X against Frost Walrus, but he ended up sacrificing his life to save X, who got heavily injured in the battle. When X awoke, the sight of Buffalo's destroyed body having been impaled on one of Walrus's Frost Towers drove X to seek vengeance. When Dr. Cain's team went to retrieve Buffalo's body, he was completely frozen, the icicle in his chest having spread all over his body. 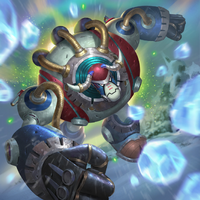 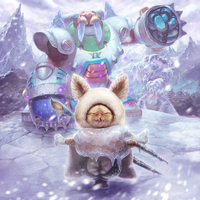 Blizzard Buffalo, frozen in the background of the TEPPEN card Uncanny Chill.

Retrieved from "https://megaman.fandom.com/wiki/Blizzard_Buffalo?oldid=336472"
Community content is available under CC-BY-SA unless otherwise noted.