"Don't think badly of me, Zero. I won't disobey Gate. I must pay for my past sins. Besides I have a new mission. You know what I mean. Let's fight!"
―Blizzard Wolfang, Mega Man X6

Blizzard Wolfang has the appearance of an ice-covered wolf. His armor is colored with light blues and icy whites, and he possesses the traits of a wolf such as a muzzle, tail, and claws. His head and claws were covered in jagged ice crystals, and he had Gate's signature rhombus-shaped gem in his forehead. In battle, he often moved on all-fours like an animal.

Blizzard Wolfang was a level-headed Reploid tormented by deep guilt for his past failures. He felt as though the only way to redeem himself was by following Gate's new orders. He apologized to X before their battle and tried to get Zero to understand his plight.

Wolfang was the leader of an investigation team stationed at the North Pole Area. One day, his team members were attacked by Mavericks and all were killed, except Wolfang, who was able to dispose of all the Mavericks himself. Researchers who opposed Gate took advantage of the incident and schemed to dispose of Wolfang under the justification that he had gone Maverick himself, deceiving Alia into throwing him into the cold sea, making it look like an accident. However, the Maverick Hunter Zero was aware of the truth behind his demise despite the coverup. In Mega Man X6 Gate revived Wolfang and made him part of his Nightmare investigation team. When confronted by the Maverick Hunters he asks them to not think badly of him, because he feels indebted to Gate and needs to pay for past sins.

Wolfang thus battles the Hunters out of his deep sense of loyalty to Gate, but they ultimately destroy him and he is killed for the final time. Wolfang seemed to be at peace at the end, as he said "Farewell..." to the Hunters before perishing.

X: Are you the Nightmare investigator, Blizzard Wolfang?

Blizzard Wolfang: Yes. I came back for this important mission. An error cost me my men and problems for Gate. To add to that disgrace, Reploid Researchers trapped me and... Nevermind. What's done is done... This is my mission. I'm sorry but I will delete you! Maverick Hunter!

Blizzard Wolfang: Zero! I heard that you returned.

Zero: I won't die so easily.

Blizzard Wolfang: Don't think badly of me, Zero. I won't disobey Gate. I must pay for my past sins. Besides I have a new mission. You know what I mean. Let's fight!

Zero: I have no choice. You will lose!

Blizzard Wolfang is part of Sigma's Maverick army in Worlds Unite. After taking part in an attack on the Sky Patrol, he departs for the world of Ōkami. However, his invasion is noticed by local defenders Amaterasu and Issun, who destroy him shortly after Sally Acorn and Wood Man arrive in pursuit. 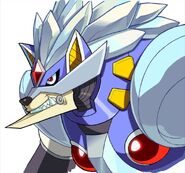 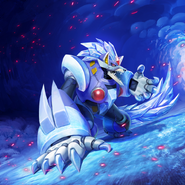 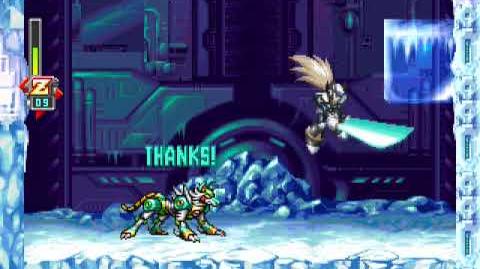 Retrieved from "https://megaman.fandom.com/wiki/Blizzard_Wolfang?oldid=355601"
Community content is available under CC-BY-SA unless otherwise noted.