"Generate heavy stone blocks that drop down to crush enemies. Try it while Double Gear is active to multiply your attack and really knock their block off!"
—Mega Man 11 description (Mega Man)

Block Dropper (ブロックドロッパー, Burokku Doroppā) is Block Man's Special Weapon in Mega Man 11. When he acquires it, Mega Man can spawn four heavy stone blocks in the air that will fall and crush enemies beneath them.

If Mega Man uses Block Dropper in tandem with the Power Gear, the weapon will instead spawn sixteen blocks, making for much greater destruction to enemies.

Just like every other Special Weapon in Mega Man 11, Block Dropper gives Mega Man new Head Gear and Arm Gear that alters his physical appearance when equipped, rather than being a color swap seen from previous classic Mega Man installments. In this case, the Head Gear is a new helmet adorned with bricks, and the Arm Gear covers Mega Man's arm with bricks. Mega Man also becomes turquoise, the same color as Block Man.

This weapon is the weakness of Acid Man. 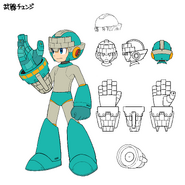