Blocky (ブロッキー, Burokkī) is an enemy robot in the original Mega Man series. It is a block stack with eyes that was a popular member of a robot circus before being modified for combat. Blocky formed a comedy duo with Pierobot, with Pierobot being the straight man, and Blocky the funny man. When damaged, a Blocky will throw the three blocks supporting its head at the player, causing the head to fall. It will, in turn, call three more blocks to support it, but upon being damaged a second time, it will be destroyed. In the English Normal mode, only one shot from the Mega Buster is required to kill Blocky. It appears in the stages of Metal Man, Crash Man, and Flash Man in Mega Man 2, Mega Man II and Mega Man: The Wily Wars.

Amount of shots/hits from Special Weapons it takes to destroy a Blocky.

Blocky appeared on the Variant Cover of Mega Man #40.

A Blocky appeared in the areas controlled by Metal Man and Crash Man.

Blocky, alongside Shotman and Telly, had a brief appearance when Crash Man ordered them to attack Mega Man in the Time-Space Research Laboratory, but Mega Man has no trouble to defeat them. 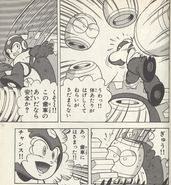 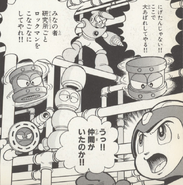 Blocky in the Rockman World 2 manga