Mega Man Legends
Rockman DASH: 5tsu no Shima no Daibouken!
Marvel vs. Capcom 2
The Blumebear, known as Brummb­­är (ブルムベア, Burumubea) in Japan, is a hi-spec machine from the Bonne family piloted by the Servbots.

When the Bonne family attacked Kattelox Island, they locked Downtown's gate to the City Hall area, and three Blumebears with different colors stood guard on the gate alongside two Draches. When Mega Man Volnutt attempts to go to City Hall to see if Barrell Caskett was alright, he had to defeat the Blumebears to obtain the key to the gate.

The red Blumebear was designed for combat and tend to do more damage and fires faster than the other two. The blue was designed for speed and can travel faster than Mega Man Volnutt can run (Mega Man can outrun the other two) but has low endurance. The yellow is designed for endurance and has the highest health bar among the three Blumebear (three times higher than the blue and twice as high as the red). Both attack with the machine guns in their arms, and sometimes the Servbot piloting will stop and open the hatch to throw a bomb or throw the key to other Blumebear.

In Rockman DASH: 5tsu no Shima no Daibouken!, Blumebears appear in Pauran Island.

In Marvel vs. Capcom 2: New Age of Heroes, Blumebear is used in one of the Servbot's attacks. When used, the Blumebear appears and the Servbot gets in, dashing forward a short distance while shooting. If the attack miss, the Servbot will be dizzy for a moment, leaving him open to attacks. It is also one of his attacks in Puzzle Fighter. 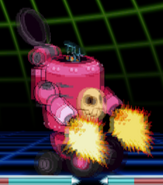 Puzzle Fighter
Add a photo to this gallery

Retrieved from "https://megaman.fandom.com/wiki/Blumebear?oldid=300886"
Community content is available under CC-BY-SA unless otherwise noted.