Bombombombs appear as invincible enemies in the first Mega Man game, launching up from pits and exploding, the resulting explosion raining harmful shrapnel on Mega Man. They are found in Bomb Man's stage and in the second section of Dr. Wily's Robot Manufacturing Plant. They can only be destroyed in the remake Mega Man Powered Up. 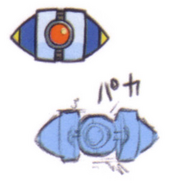 Mega Man Powered Up concept art
Add a photo to this gallery
Retrieved from "https://megaman.fandom.com/wiki/Bombombomb?oldid=308162"
Community content is available under CC-BY-SA unless otherwise noted.