Bon Bonne (ボン・ボーン, Bon Bōn) is a character from the Mega Man Legends series. He is the youngest in the Bonne family, yet he is the biggest and strongest. He is a baby and the only thing he can say is "Babuu." Somehow, his siblings Teisel Bonne and Tron Bonne can understand what he's saying. Although he is just a baby, he is very dependable and actively participates in battles, also leading Servbots in missions. His body is made of parts created by Tron that can be swapped to adapt for the circumstances.[2]

In the beginning of the game, Bon Bonne goes out with his brother Teisel to search for the Nakkai Ruins in the desert in Ryship Island, and he found its entrance. When Teisel reached his location, Bon was attacked by Glyde's Rafale and his body was destroyed, leaving only the head. Teisel battles Glyde with the Gustaff, but he is defeated and Glyde captures him and Bon. They reappear in the last mission when Tron rescues the two. When Tron faces Glyde's Rafale and apparently defeats him, Glyde says he was not serious yet and that his mecha has a powerful transformation, but it is interrupted by Bon, who jumps on him and destroys Rafale. Bon is last seen commemorating with the Bonnes their victory over the Colossus, where a Servbot says he is not supposed to eat the food with him.

In Mega Man Legends, the Bonnes attack Kattelox Island. In the attack to City Hall, Bon uses a flying body called Schmetterling (シュメッターリンク, Shumettārinku, also known as a Hornisse type body), and fights against Mega Man Volnutt. He attacks with powerful claps, missiles, and a party horn-like attack, and destroys objects in his way like trees with punches. If Mega Man gets to far from him, he attacks the City Hall until it's destroyed. After his defeat, his head falls dizzy and Servbots use a Drache to pick him up with a magnet. He is later seen with the Bonnes inside the Balkon Gerät, Focke-Wulf, and Theodore Bruno.

Bon first appears using a small flying "drill type" (ドリル型, "drill type") body to search for the Mother Lode key in the Saul Kada Ruins with Tron. Bon and Tron are unable to defeat Wojigairon, and when Mega Man meets with them, they agree to work together temporarily to stop the lava flow using Konis to cut Wojigairon's energy supply. After stopping the lava flow, Bon has the idea to let Mega Man fight against Wojigairon while he and Tron go after the key. Bon manages to get the key first and fights against Mega Man for it. His body has a powerful drill in the head and he can fire his hands to electrify Mega Man. If defeated, he will fall on the lava, and Mega Man hopes he is all right. If he reaches the exit, he will commemorate and accidentally drops the key on the lava, running away, and Mega Man has to search for the key in the lava.

Bon later appears as part of the Gemeinschaft train. During Geetz's attack to the Sulphur-Bottom, the three Bonne siblings are inside a Drache and help Mega Man, so they can get the keys, but the Drache is shot down by Geetz.

The Bonnes were confirmed to appear in the cancelled game Mega Man Legends 3. Bon's role in the game is unknown, but a post in the Devroom suggests that Bon could have all of his body parts sold to generate funding to build the rockets, leaving Bon only with his head, which can be kicked.[3]

Bon appears as a boss twice with his Hornisse body from Mega Man Legends. 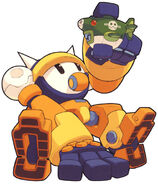 Concept art of a powered suit for Bon Bonne from Mega Man Legends 2.
Add a photo to this gallery

Retrieved from "https://megaman.fandom.com/wiki/Bon_Bonne?oldid=300887"
Community content is available under CC-BY-SA unless otherwise noted.