MMKB
Register
Don't have an account?
Sign In
Advertisement
in: Articles with hAudio microformats, Reploids, Mavericks,
and 9 more

Boomer Kuwanger (ブーメル・クワンガー, Būmeru Kuwangā) also known as Boomerang Kuwanger, is a boss in Mega Man X, a Reploid based on the stag beetle ("kuwagata" in Japanese). He is a former Maverick Hunter who joined Sigma's rebellion.

Boomer Kuwanger worked in the 17th Elite Unit under Sigma, in the same unit as his brother Gravity Beetle. He is a nihilist that doesn't agree or disagree with Sigma's motives, and joined the Maverick uprising simply because he thought "isn't this more interesting?"

After joining Sigma, Kuwanger took control of a tower that was supposed to be the symbol of a city, and turned it into an oppressive fortress. He sat plotting within, sneering at the despair in the city below until X came to stop him.

After his defeat, Kuwanger reappeared in Sigma's Hideout as the first of the Maverick boss rematches.

Boomer Kuwanger uses instantaneous movements and attacks by throwing his Boomerang Cutter or using it to grab his target above his head. If he grabs the player, he will damage them by throwing them into the ceiling. He is weak to Homing Torpedoes, as they lock on to his energy signature, and they can hunt him down even when he vanishes. However, if the player continuously shoots him with the X-Buster, Boomer Kuwanger will not have a chance to hit with his Boomerang Cutter or move close to the player.

Boomer Kuwanger is the last of the eight Mavericks that X fights in the Rockman X manga. X was searching for Zero in an aerial vehicle when a giant tower appeared from the ground and wiped out the city around it in one shot, and was charging in preparation for an even greater one. After entering, he finds Boomer Kuwanger at the top of the tower. Kuwanger joined Sigma because it is more fun than his days as a Hunter, and he moves so fast that X can't see him. His Boomerang Cutter is sharp enough to cut X's armor, damaging his X-Buster. At a disadvantage, X tries to shoot in all directions to hit him, making Kuwanger worried and slow down for a short time when he hit a part of the ceiling. Due to this and Kuwanger saying that he was "reborn", X shot at the ceiling (also destroying Kuwanger's right leg) and discovered that he moved his mind to the tower, allowing him to surpass his physical limits. His mind was protected by a forcefield that could not be destroyed even by X's charge shot. When the charge of the tower completed, X saw an energy line and attached it to his buster, giving him enough energy to destroy almost half of the tower with one shot, destroying Boomer Kuwanger. X's buster became useless after this.

In the Rockman X2 manga, Boomer Kuwanger is one of the zombies that appear in Morph Moth's illusion.

Boomer Kuwanger is revived by Dr. Doppler by infusing the Limited on his body, turning him into the Limit Reploid Boomer Kuwanger L. As a Limit Reploid, his main colors are now green and blue, with red, black and blue details. His abilities improved and he has a blade on each arm. X destroyed him with Homing Torpedo, and Curtiss took the Limited from Kuwanger's wreckage.

In the manga adaptation from Rockman Remix, Boomer Kuwanger L appears in the beginning being defeat by Zero. Curtiss appears to take his body and leaves before Zero could do anything.

Boomer Kuwanger is seen among Sigma's group of Hunters in issue #35 of the Mega Man comic. Following his defeat in Mega Man X, he was recreated by Sigma as part of an army that he intended to use to plant Unity Engines on various worlds. After participating in an attack on the Sky Patrol, during which he attacked Sally Acorn and Antoine D'Coolette, he departed with the majority of his comrades through Genesis Portals to begin the invasion. 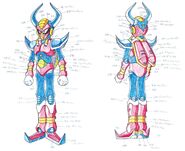 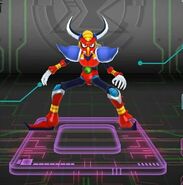 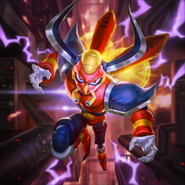