Boomerang Cutter (ブーメランカッター, Būmeran Kattā) is the Special Weapon that X obtains from defeating Boomer Kuwanger in Mega Man X. When equipped, X can fire crescent-shaped boomerangs that fly in a short arc before returning to X (they will arc upward if X is standing and downward if he is in the air). The Boomerang Cutters can be used to grab far away items and will sometimes return weapon and life energy from defeated enemies. X recovers any Weapon Energy used from Boomerang Cutters that return without being destroyed. Up to three cutters can be present on the screen at a time. When fully charged, four larger boomerangs spiral outward diagonally from X's position. Charged Boomerang Cutters can not retrieve items. When deflected by immune enemies, the Cutter does not return to X.

The charged version in Mega Man Maverick Hunter X has some changes. Instead of spiralling out from X's position, the four large boomerangs simply shoot out and return to X a few times in straight lines before spreading out and the size of each large boomerang is twice the size as compared to the original version.

This weapon is the weakness of Sting Chameleon and D-Rex. Vile will take a considerable amount of damage from a charged Boomerang Cutter as well.

This weapon makes a re-appearance in Marvel vs. Capcom: Infinite as a part of X's movelist, albeit with a few differences. Not only does X physically throw the cutters (instead of firing them with his Buster), but they also move in a different trajectory. It is thrown upwards first and returns in a clockwise motion, and will not disappear when blocked. When hit, it will do multiple hits and drag the opponent closer to X for a combo setup. X also throws a barrage of their charged version in his Special Weapons Rush (S.W.R.) Level 1 Hyper Combo. 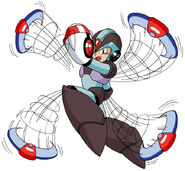 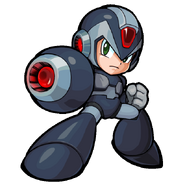 Mega Man X with three Boomerang Cutters on the screen.

Mega Man X jumping and firing a Boomerang Cutter (so as to demonstrate its ability to change its direction when X falls and fires the weapon).