Bospider (ボスパイダー, Bosupaidā, portmanteau of "boss" and "spider"), known as Bosspider in the remake Mega Man Maverick Hunter X, is the giant spider boss at the end of the first part of the final stages in Mega Man X, Mega Man Maverick Hunter X, and Mega Man Xtreme. It was developed to be a large-scale Crusher that was once used to crush scrap metal before being roped into guarding Sigma's fortress, where it moves in a web-shaped rail. Although it was supposed to be an invincible defense mechanism, the shock when hitting the ground causes it to expose its weak point due to a design error.[1]

Bospider creates random paths down its four rails to crush X, so the player must stay on the move. Its method of navigation is similar to Japanese lot-drawing, or Amidakuji. It has strong defense, but a red core on its abdomen, its weak point, will be exposed when it hits the ground. Occasionally it will spawn four Petitpiders before moving though it will also do this in the middle of its path if the player is in the air. As its health drops, Bospider will move faster while in Maverick Hunter X, the delay between the moment the lasers appear and the moment Bosspider starts moving decreases (in Hard difficulty only).

In Mega Man X, its main weakness is Shotgun Ice (along with Magnet Mine in Mega Man Xtreme). It is however difficult to hit the boss in time to hit the core when it appears, as it is only exposed for a short time.

Bospider appears as a Maverick Data with a strategy similar to its original appearance, with the addition of releasing red Petitpiders that chase the Player. Bospider is the boss of the Co-op stage 8-2, the seventeenth boss from the Challenge mode, and is fought in some levels from the Jakob Orbital Elevator mode, appearing alongside Bit on level 60, Chill Penguin on level 90, and Chop Register on level 125.

Bospider is the boss of the second Halloween event, The mysterious master of the Nocturnal Castle, where it is a yellow spider with a large eye on its core named Spidevil, resembling the Yellow Devil MK-III, and the Petitpiders are shaped like pumpkins. Its strategy is largely the same, but it is also able to release web balls that can stun the player, and Batton Bones will periodically appear from the pillars to hinder the player. Eight treats appear after its defeat.

Petitpider (プチパイダー, Puchipaidā)[2] is a small spider Mechaniloid produced by a device within the Bospider's body. This enemy deals contact damage and runs along the walls of the boss room.

Petitpiders are also released by Bospider in Mega Man X DiVE, as well as a red variant which chases the players and explode in contact with them. Additionally, a black Petitpider variant appeared as an enemy in the Halloween events, and pumpkin variants are released by Spidevil.

A Petitpider variant appeared on the Monster Hunter Rise collaboration event Mission Code: R·I·S·E from Rockman X DiVE, in where they will shoot web balls that stun the Player and makes them fall. This version appears to be based on the Rachnoid.

Displays the amount of damage in units that Bospider will receive from each Special Weapon in Mega Man X.

Bospider appeared in Worlds Unite as part of Sigma-2's army. It later fights Mega Man and Sonic alongside its Petitpiders, but they are destroyed.

Bosspider as it appears in Mega Man Maverick Hunter X. 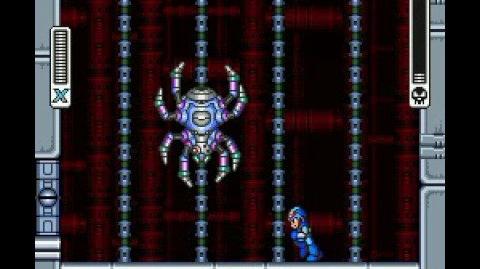 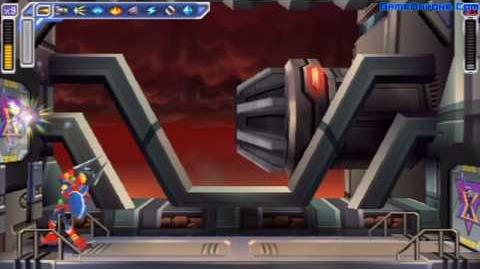