The first boss character contest, which had 8370 entries and decided the eight Robot Masters that appear in the game. 10 participants received a "staff only" blouson, 100 received a Rockman 2 Original Music tape, and 500 received seals.[1] Besides the eight winners, forty participants were listed in the game's Japanese manual.[2]

As the game had a strict deadline, the staff couldn't wait until after the submissions had arrived and selected the winners to start development. Instead, work was made on the stages and enemies, and the staff had a loose idea of what kind of boss would be needed for each stage (wind and electric themed boss characters for the air themed stage, animal and nature themed bosses for the forest, etc). They selected the motifs they found most interesting from the many submissions, Keiji Inafune cleaned them up and redesigning them as necessary, and they selected one of the designs.[3] 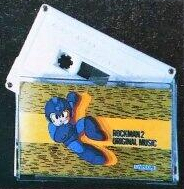 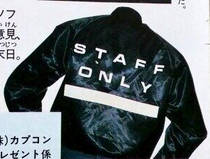 The contest decided the eight Robot Masters. Had 50,000 entries. Some runner up entries received a pencil case and ID card as prize.[4] Some participants also had their names listed in the special thanks from the ending credits.[5]

Similar to Mega Man 2, the staff could not wait for the submissions to start development, so some placeholder bosses were used while planning out the stages. When early designs from the game were compiled for R20 Rockman & Rockman X Official Complete Works in 2008, Keiji Inafune didn't remember which of the unused bosses were designed as placeholders and which ones were part of the contest.[6]

The eight Robot Masters.[7] Had 70,000 entries. The winners from this game's contest received a golden Rockman 4 cartridge.[8] Everyone that participated received the booklet Rockman Character Collection, and towels were also given as a gift.[9] 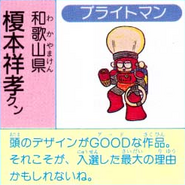 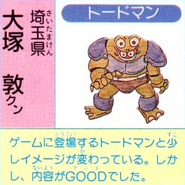 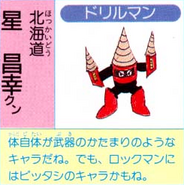 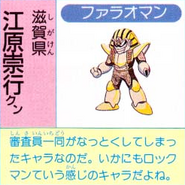 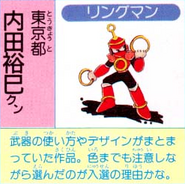 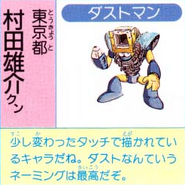 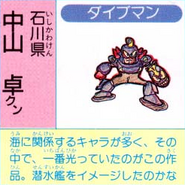 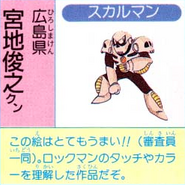 Like previous contests, it decided the eight Robot Masters. Had 130,000 entries.

The only contest from the original series with non-Japanese winners, with a contest being held by Nintendo Power. Had 200,000 entries. One of the non-Japanese winners, Daniel Vallée, recalled that, besides his winning entry of Knight Man, he had submitted enough Robot Master designs to fill eight whole games, with names including Wave Man and Samurai Man (the former of whom had coincidentally had a shared name with an unrelated Robot Master in Mega Man 5).[11]

Some of the Mega Man 6 entries included in Nintendo Power #44.

Light Prize:
32 participants were included in the credits as special designers.

For this contest a template was given for three of the six bosses that would receive the Dr. Wily Prize: one boss character with a sword (the winner being Sword Man), one with extendible arms (Clown Man), and one with two heads (Search Man). The other winners were Frost Man, Grenade Man and Aqua Man. Tengu Man and Astro Man were made by Capcom. Besides the six winners, some submissions are displayed in the game's credits and the Sega Saturn's Bonus Mode,[13] and some participants are listed in the credits as part of the Dr. Light Prize. Some participants won a Mega Man themed calculator.[14] Had 110,000 entries. 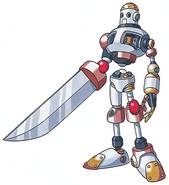 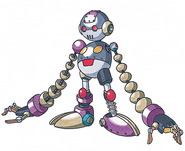 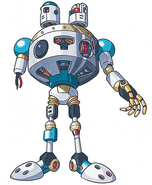 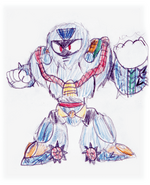 Although not a boss contest, The Misadventures of Tron Bonne held contests that had the Servbot Borer (by べのむ) and the Bonne Bazooka as the winners. The designs made by the fans can be seen in the credits from the Japanese version.

Before Mega Man Legends 3 was cancelled, the Devroom held events for fan content to be included in the game, which included a Bonne mecha boss, a Reaverbot boss, the Bright Bats mascot, promotional ideas, townspeople, and easter eggs.

Boss contests makes a return for Mega Man Battle Network in a smaller scale than it was in the classic series. It’s limited to a few bosses instead of becoming all of game's main bosses.

The winner of the Mega Man Battle Network 2 contest becomes the NetNavi of Mr. Famous. The Navi also has his own Program Advance (a super move based on that Navi's attack).[16]

The winners of the Mega Man Battle Network 3 contest become Navis of various roles. KingMan is the Navi of a re-occurring character. The other two are the Rank #2 Navi of the Undernet between the two versions. MistMan for White version and BowlMan for Blue version. The three also work together in a Program Advance super move, Grand Prix Power.

The winners of the Mega Man Battle Network 4 contest become Navis of various roles. VideoMan is a Navi of an in-game tournament's participant. KendoMan is Mr. Famous' Navi, who also participates in a tournament. LaserMan is the antagonist group leader's Navi. The three Navis also work together in a Battle Chip, Grand Prix Power. This chip was only obtainable from real life events or an e-Reader card. These Navis also appear in Rockman EXE 4.5 Real Operation.

The winners of the Mega Man Battle Network 5 contest become Navis of various roles. CosmoMan is a story boss, GridMan is Mr. Famous's Navi, and LarkMan is an optional boss in the Undernet. All theses Navis also have their own corresponding Program Advance (a super move based on that Navi's attack).

The winners of the Mega Man Battle Network 6 contest become story Navi bosses in the game. While Mr. Famous is in this game, he does not have a fightable NetNavi.

After Mega Man Star Force 3, the winner of the next game's contest was originally submitted under the goal of being in the next Mega Man Star Force series game. However, the idea was scrapped for an advanced port of the first Mega Man Battle Network, Rockman.EXE Operate Shooting Star. ClockMan is the in-game reason on how the MegaMan.EXE and Star Force Mega Man crossover happens.

Boss contests makes a return in the Mega Man Star Force series in an even smaller scale, limiting to one winner per game.

The winner of the Mega Man Star Force 2 contest becomes an optional boss.

The winner of the Mega Man Star Force 3 contest becomes a roadblock boss that must be defeated to proceed with the story.

Two contests were held. In the first, the winner was Arcade Man, and he was included as a boss. Besides Arcade Man, three runner-ups (Tabletman, Zehr, and Daruman) were added as Battle Memory.[17][18]

The second contest had a Japanese motif, with eleven characters being selected to be redesigned in a Mega Man style, and two of them (Udon Man and Sudachi Woman) also being included as Battle Memory.[19] 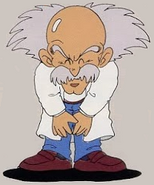 Image of Dr. Wily thanking everyone for the submissions. 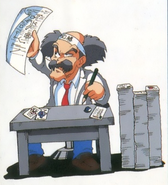