Botos, known as Borock (ボロック, Borokku) in Japan, is a boss from Mega Man X: Command Mission. He first appears in the prologue of the story, attacking X to prevent him from helping Zero.

He has a main role in Chapter 7, when he is behind the jammer spots in Vanallia Desert. He first appears in the chapter talking with Scarface about X and his friends survival. It's also hinted in that scene that he wants to usurp Scarface's position. He reveals himself on the 3rd floor of the base after the jammers are shut down and uses a tiny bit of the Supra-Force Metal to fight X and Zero's party. When defeated, he is knocked back in a comical way and retreats, but Steel Massimo notices that the battle went too easily.

He later reappears in Chapter 8 where it is revealed that two of the Cadres have keys to unlock the Supra-Force Metal warhead, which included himself. After a small chase, he locks himself in a room that X and Zero's party can't gain access to. After Ferham is defeated, Botos claims that he is under orders from Epsilon to relocate the Supra-Force Metal, and rips Ferham's warhead key from her body. Later, it is revealed that he actually swiped the keys on his own accord to get the Supra-Force Metal pieces for his own aspirations of power (even maniacally badmouthing Epsilon, his beliefs, and the entire Rebellion Army as well), but then he is easily killed by Colonel Redips (disguised as Spider).

He speaks with a deep southern accent, enjoys taunting his opponents, and often speaks in support of the Rebellion when confronted by its enemies, but beneath it all is little more than a self-serving schemer and a coward. It seems even Epsilon knows this on some level - despite his constant Rebellion PR, Scarface is the commander's direct right hand man and Ferham seems to be higher in command than Botos, as she doesn't quite believe him when he claims that Epsilon ordered him to bring him the metal. 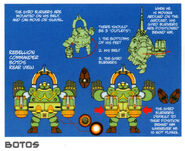 Retrieved from "https://megaman.fandom.com/wiki/Botos?oldid=200637"
Community content is available under CC-BY-SA unless otherwise noted.