Bounce Man, known as Rubber Man (ラバーマン, Rabāman) in Japan, is a Robot Master who appears in Mega Man 11. He was originally developed as a crash test robot, but his stretching and bouncing abilities led him to become a fitness instructor at an indoor athletic center/amusement park called Boing-Boing Park, and his colorful body and friendly appearance led to his transformation into a big hit with kids and adults alike. Despite being repurposed for combat by Dr. Wily and equipped with a Speed Gear, after which he took over Boing-Boing Park, Bounce Man is still the same large, cheerful, childlike robot he always was, still viewing everything as one big game.

His Special Weapon, Bounce Ball, allows Mega Man to shoot three bouncy balls, which can be tilted up or down, that bounce off of walls and enemies several times before exploding in a burst of confetti.

Bounce Man is designed like a bouncy rubber ball. He is a large, round, pink robot with two beige buttons and two turquoise tubes on his chest. He has two stubby legs with large ball-shaped feet. His arms are long and rubbery, and his hands are also large balls with fingers. He has an antenna on his head, which has a small white ball at the end of it. Bounce Man's arms are retractable, and his limbs and head can be separated from his body, though this usually only happens when he's hit with a very powerful attack.

Bounce Man spends most of the battle bouncing around the room in a diagonal pattern. He'll sometimes stop moving to throw a punch at Mega Man with one of his stretchy arms. Later in the fight, he'll use that to get closer to Mega Man by grabbing the ground at a spot near Mega Man and then pulling himself to that spot. Sometimes he'll also try to squash Mega Man by slamming on the ground. These attacks are fairly easy to avoid as long as you keep moving around his arena, but it may be somewhat difficult to land a good hit on Bounce Man since he's almost always moving around. It should also be noted that he also reacts to certain attacks in ways that may make the battle more difficult: a charge shot that strikes his body will simply knock Bounce Man back and make him bounce faster for a while, but if he's hit with a Power Gear-induced charge shot or Pile Driver, his body will break apart; his head, hands, and feet will detach from the main body and bounce around on their own for a little while, before Bounce Man eventually reassembles himself with harmless vortex surrounding him as his parts rise up. When he's low on health, Bounce Man will activate his Speed Gear and bounce around the room at a much higher velocity; this lasts around ten seconds before Bounce Man deactivates his Speed Gear. After Bounce Man falls, Mega Man obtains Bounce Ball.

On Superhero difficulty, Bounce Man is faster by default, and his punches are faster as well. 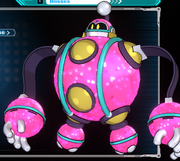 Bounce Man was developed as a crash test robot, but his incredible stretching and bouncing abilities led him to become an instructor at the indoor athletics facility "Boing-Boing Park."

Innocent and optimistic, he can't help bouncing around in joy no matter the situation. He tends to accidentally bounce into people and send them flying, making himself a bit of a nuisance.

His fitness lessons at Boing-Boing Park are a new style of exercise that he calls "Hopxercise" - it's like boxing, but on trampolines. It's surprisingly popular with middle-aged women.

His funny looks and big round body are a hit with kids, making Bounce Man a household name.

Taunts (When he reassembles his body from Mega Man popping him):

Taunts (When a hit makes him bounce faster): 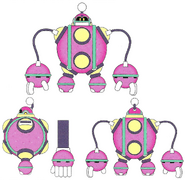 Advice from Light Labs #7
Add a photo to this gallery

Retrieved from "https://megaman.fandom.com/wiki/Bounce_Man?oldid=353691"
Community content is available under CC-BY-SA unless otherwise noted.