Boyorn is an enemy in Mega Man 11 that appears exclusively in Bounce Man's stage. Much like Bounce Man himself, these enemies were modeled after a rubber ball; their body resembles a large teal ball with yellow bumps. The Boyorn was created as an exercise robot for the athletic center/theme park Boing-Boing Park. As such, its outer body is made of rubber, making it so that it will bounce around the room whenever it's attacked. It also takes a lot of hits to destroy.

An exercise robot that can bounce around thanks to the thick, tough rubber protecting its inner body. It can fall off the roof of Boing-Boing Park and not take any damage - it's tried!

Poyorn is a weaker variant of Boyorn that also appears in Bounce Man's stage, only seen during the battle with Frog Balloon, where three Poyorns spawn once Frog Balloon is destroyed. Poyorns take far fewer hits to destroy because their bodies are made of a cheaper type of rubber, and are colored green with pink bumps to distinguish themselves from Boyorns.

A cheaper version of a Boyorn. Its rubber coating is thinner and more easily pierced, but Pump Master K actually prefers the Poyorn color scheme. 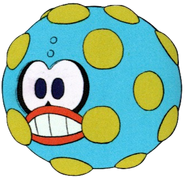 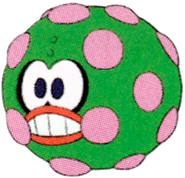