MMKB
Register
Don't have an account?
Sign In
in: Articles with hAudio microformats, Reploids, Mavericks,
and 7 more

Shredder of the Deep
(深海の切り裂き魔)

Bubble Crab, known in Japan as Bubbly Crablos (バブリー・クラブロス, Baburī Kuraburosu), is a crab-based Reploid from Mega Man X2. He was once a Maverick Hunter and served in the 6th Naval Unit along with Wheel Gator (the two had a strained working relationship and always argued). Being extremely avaricious, Bubble Crab's only motivation in life was to amass great wealth; he joined Sigma's rebellion purely out of greed, as he saw it as his chance to get rich quick. He was put in charge of transportation, and tasked with defending the Mavericks' deep-sea submarine base.

Bubble Crab has a variety of attacks that can sometimes make him difficult to fight if the player is not prepared. He often encases himself in a giant bubble that takes a good amount of damage to be destroyed, and he can also launch mini crab drones and bubble rings at X. His room also has a rising and sinking tide which adds further challenge to the battle. He falls quite easily to the Spin Wheel, however, as the weapon is capable of instantly destroying his bubble shields.

Crab also has a fairly easy AI pattern to manipulate: whenever X is above him, he will jump upwards with his claws. If the tide is high enough, it is possible to lock him into this pattern by jumping over him and back, firing as he hits the ground, then repeating the process. If done correctly, Bubble Crab may never use a different attack.

The weapon acquired by his demise is the Bubble Splash

Bubble Crab was cloned by Sigma during the Worlds Unite event, a crossover between Archie's Mega Man, Sonic the Hedgehog, Sonic Universe, and Sonic Boom lines with Mega Man X and other Sega and Capcom properties included. He joined an army of Mavericks who joined their master in attacking the Sky Patrol before departing to claim other worlds for Sigma.

Bubble Crab is a greedy Reploid that was smuggling goods to become rich, including Meyer Rubies, using his corrosive bubbles to melt aquatic Reploids and take the rubies from their remains. When Marty and her pirate crew began plundering his ships, it angers him. When X appeared in the area to investigate, Marty decided to attack Bubble Crab's base, and X soon appeared to assist her. X managed to defeat Bubble Crab, but his demise triggered the base's self-destruction system, nearly taking X and Marty with him. The explosion scattered Bubble Crab's money in the ocean and destroyed his Meyer Rubies.

Dr. Doppler used the Limited to revive him as "Bubbly Crablos L". As a Limit Reploid, his pincers became larger and stronger, and his avarice also increased. While X was aiming the X-Buster to take down the revived Maverick with Spin Wheel, Curtiss appeared and attacked X, throwing off him aim, but X still managed to land a critical hit on his target. Afterwards Curtiss took the Limited from his body and escaped.

Bubble Crab had a brief appearance in Rockman X2: Ano Tokushu Buki wo Ubae!, where he is defeated by X with Spin Wheel. He also had a short appearance in the Rockman X Mega Mission manga adaptation from Rockman Remix. 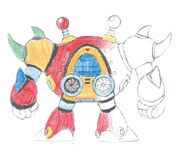 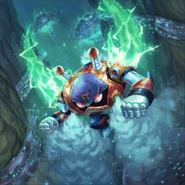 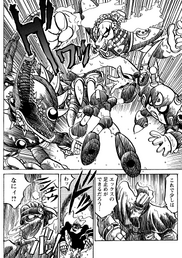