Bubble Man (バブルマン, Baburuman) is a Robot Master from Mega Man 2. He is the first aquatic Robot Master created by Dr. Wily for underwater combat. However, a defect in his systems made him unable to walk on land, being only able to move by jumping (akin to a frog). When Wily noticed this, he couldn't help but laugh. Despite this flaw, Bubble Man is at home in the water, being able to swim at a remarkable speed.

Bubble Man attacks with normal shots from a cannon on his left arm, and can fire his Special Weapon, the Bubble Lead, from both the aforementioned arm cannon and a special Bubble Gun on top of his head. Bubble Man can utilize the bubbles for several different purposes, including hitting opponents with bursts of small bubbles and blowing larger and more durable bubbles to either wrap opponents inside to trap them temporarily, or for Bubble Man himself to hide in as his own personal shield.

Bubble Man is a rotund robot with dark blue eyes, he wears a blue skin tight suit with a dark green armour over. He sports a head set that is a helmet with a snorkel like tube in the top of his head, diving googles and a mask that covers the lower half of his face. He also sports black flippers. He carries a pair of tanks from his back and his left arm is a cannon that he uses to shoot his Bubble Lead.

Despite often being the butt of jokes due to his design flaws, Bubble Man is an affable and high-spirited individual, but has a bad habit of lavishly spending money when he has it. He enjoys bathing in hot springs in his spare time, but much like the later-introduced Wave Man, has a vehement dislike for water pollution, especially oil slicks.

Bubble Man's battle takes place underwater, so Mega Man will be able to jump much higher than usual. The player must be careful not to jump too high, as there are instant-death spikes on the ceiling. When the battle begins, Bubble Man will shoot three Bubble Leads, then jump over to the other side of the room. The bubbles are avoided by passing under them when they are bouncing. He'll repeat this strategy several times. If Mega Man tries to jump, Bubble Man will shoot him down with his arm cannon. He is vulnerable to attacks when he shoots his bubbles or when he lands.

His weakness, the Metal Blade, eliminates the need of jumping to attack and deals considerable damage to him. It defeats him in four hits in Normal Mode and seven in Difficult.

An alternate weapon to this is the Quick Boomerang, but the player should be careful using it, as it is a close range weapon. It defeats him in seven boomerangs and fourteen in Difficult setting.

Another strategy is using a Crash Bomber against a wall near where Bubble Man will land. If timed correctly, the 3-4 hits from the bomb's explosion can cause massive damage.

In Mega Man 3, the second Doc Robot in Gemini Man's stage copies Bubble Man's moves, and before the battle, Bubble Man has a cameo appearance as program data copied by Doc Robot. This Doc Robot is weak against Spark Shock and Shadow Blade. Unlike the original Bubble Man, Doc Robot's shots are slightly bigger, although they deal the same amount of damage.

Bubble Man is one of the four bosses from Mega Man 2 that appears in Dr. Wily's teleport system inside the Wily Castle. His actions are similar to Mega Man 2 and he is weak to Quick Boomerang.

"You can't move once you're caught in Bubble Man's bubble. Attack with a sharp weapon that can cut through the bubble!"
—Dr. Light

Bubble Man is one of the six bosses from the "Search for Wily!" course. He attacks with Bubble Lead and Claws (or a similar robot). He is weak to the Shadow Blade.

Sixteen of Dr. Wily's robots from Rockman 2 and 3 are rebuilt by Ra Moon, including Bubble Man. After Rockman defeats the first boss, Metal Man, he will spot a river and the player must decide if he pass by the river or by the nearby mountain. If the player choose the river, Rockman will be attacked and fall into a deep part of the river, where he will fight against Bubble Man. If the player loses to Bubble Man, the deactivated Rockman sinks into an underwater crevasse, but will somehow be saved by Guts Man, and the player can have a rematch with Bubble Man.

On the other hand, if the player choose the mountain, Rockman will meet Guts Man on the other side, who says that he found Bubble Man defeated (apparently by Blues) and took his Bubble Lead to give to Rockman, and Rockman fights against Heat Man instead.

Near the end of the game, Dr. Wily's robots (except for Shadow Man) are revived, and Wily orders them to destroy the captured Rockman. However, Ra Moon attacks the fifteen robots, revealing his true intentions, and when Wily orders the newly created Ra Thor to destroy Ra Moon, but he attacks Wily's robots. Rockman is freed and he defeats Ra Thor, but Ra Moon reveals he created a robot called New Yellow Devil. Wily orders his robots to attack the New Yellow Devil, but their attacks cause no harm and it knocks down all robots. If the player is defeated, Rockman can ask the robots to help him, and they will give their remaining energy to Rockman and shut down. Their bodies are apparently destroyed in the explosion of Ra Moon's temple.

Bubble Man appears as one of Virgo's bodyguards in the Undersea City level, alongside Freeze Man. Later, he is joined by Burst Man and Stone Man in fighting Rockman's team on a bridge.

Translation: The first underwater robot of Wily's mechs. The way he swims is cute. Use big jumps to attack him.

Translation: He was the first humanoid robot designed specifically for underwater use, but due to his waterproofing, he was unable to walk and had to jump to move around in the water. He was so cute that even Wily laughed when he traveled long distances. His special weapon is Bubble Lead.

Enemies in Bubble Man's stage, the first underwater stage from the series. It is filled with spikes in the ceiling, which are dangerous as Mega Man jumps higher due to the buoyancy.

Amount of damage in units that Bubble Man receives from each Special Weapon in Mega Man 2.

Bubble Man appeared in episode 20 of Captain N: The Game Master, where he and other robots play soccer against the main characters. This version has a round blue body and a tank of water on his head.

In the manga Mega Man Megamix, Bubble Man has his arm cannon on his right arm instead of his left arm; his arm cannon is a spear gun, he has screw propellers under his foot, and he has a "W" on his knees and belt. Bubble Man made a very short appearance in the story "Orders to Destroy R", where he's in the sea near the Wily Castle. He attacks Mega Man while he was approaching. Heat Man, who was pursuing Mega Man, was kicked into the water, making the water boil with his heat. Bubble Man had to swim away to avoid damage in the overheated water. 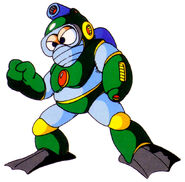 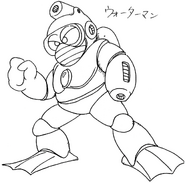 Front, side, and back view of Bubble Man. 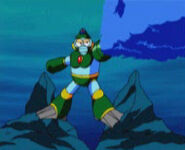 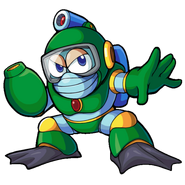 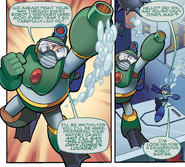 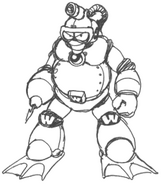 Bubble Man (overlapped by one of the Bit Benders) in Rock'n Game Boy.