Bubukan (ブブカン, Bubukan) is a pole vaulter robot enemy in Mega Man 3. They were originally created by Dr. Light to participate in the Robot Olympics. Bubukans pole vault over Mega Man and then run back. The base of their pole vault is invulnerable to attack and shields them while they charge Mega Man. The pole vault can be destroyed once the Bubukan dismount. Bubukans appear in Snake Man's stage and Needle Man's revisited Doc Robot stage in Mega Man 3 and the third Wily Tower stage in Mega Man: The Wily Wars.

Amount of shots/hits from Special Weapons it takes to destroy a Bubukan.

Bubukan MK-II is a variant of Bubukan that appears in Snake Man's stage in Mega Man III. They do not have a pole, but the upper part of their body can jump over Mega Man.

Bubukan appeared on the Variant Cover of Mega Man #40, and Bubukan MK-II appeared in the Rockman World 3 manga. 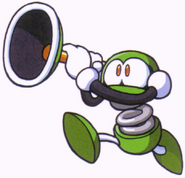