Bud Bison, known as Gonta Ushijima (牛島ゴン太, Ushijima Gonta) in Japan, is a character in the Mega Man Star Force series. He's a big guy who is one of Luna Platz's lackeys. He can turn into Taurus Fire at will because of the Hunter VG that Bud owns in Mega Man Star Force 3. Proud to be like Mega Man and Harp Note, when Bud is Taurus Fire, he helps Mega Man defrost himself and others in the Diamond Ice conflict.

Bud is shown to be a tough guy and a gruff bully, but he's actually pretty lonely inside. The BrotherBand with Luna helped him out with his loneliness. However, he can be idiotic and a regular "dumb, tough guy" most of the times. He also is a fan of Sonia Strumm (Sonia Sky) in both the games and the anime.

Bud is almost never seen without Luna Platz and Zack Temple. He seems to be more friendly with Zack, possibly due to the fact that they are both lackeys. During one of Omega-Xis' reckless moments, Geo accidentally punched Bud, which knocked him out and humiliated him. Luna threatened him to act better or their BrotherBand will be cut, which put Bud to depression. Taurus took the chance to manipulate Bud and for about three days, Bud, influenced by Taurus, trampled over anything red. One night, while Geo was walking home from Vista Point, Taurus convinced Bud to EM Wave Change with him, and the two became the EM life form Taurus Fire. Fortunately, Mega Man defeated Taurus Fire and Bud returned to normal.

For the rest of the game, Bud is shown as nothing more than an innocent bystander, being caught up in Cygnus Wing's Swan Dance, being turned into an EM Wave human experiment, and being captured by Jammers. He looked up to Mega Man, and when Geo (as Mega Man) saved Bud, Luna, and Zack, he asked Geo to make a BrotherBand with him.

Bud is shown to be a fan of a pro skier named Amy Gelande. Trying to impress her, Bud accidentally turns into Taurus Fire, without the help of Taurus himself. Rogue ends up sending Bud, along with Zack and Sonia down a Mu-generated black hole, where Bud ends up in Whazzap Village, and developing amnesia due to hitting his head. Geo, Zack, and Luna later see Bud in Whazzap Village, having traced him earlier. Bud, or rather, Budicus, doesn't remember them, for he doesn't remember anything due to his amnesia until he remembers his favorite eating habit. The Shaman of the village persuades his people to think he is god to attract tourists. Because of this, Mega Man had to save Budicus, or rather Bud, from Rogue. He later gets out of his amnesia, and then ends up being kidnapped along with Zack and Luna by the Shaman, having gained the power of Terra Condor. After the Shaman took their advice of using tourism to get ahead in the world so they could advance without having to abandon their old ways, the Shaman then had a statue erected of Bud as his Budicus self, to which he told the tourists that the statue was of "an important figure."

Bud is still a simple bystander when Geo deletes viruses. But at WGB Studios, Jack and Queen Tia, (know as Ms. Tia while going undercover) are on top of the building and throw a noise card on Bud, causing he to EM Wave Change into Taurus Fire. What happens...What else!? Geo jumps into action! Mega Man defeats Bud, and Taurus awakens and becomes Bud's Wizard. Bud shows that he knows about the forbidden art of "Boxers Off", which Dex used in Mega Man Battle Network 5. Geo, Bud and Zack explain it to Jack while at the beach in Alohaha. Just like in Battle Network 5, the screen goes black and a ripping sound can be heard, which implies that he failed and ripped his underwear. Bud is also able to control Taurus and become Taurus Fire at will (as Taurus is now his Wizard), and has been recruited as an officer of the Satella Police, but later quits to protect Luna and Zack.

Bud is shown to be a regular tough guy most of the times, and will use violence to solve problems, which didn't work on Geo. He also seems to be more independent in the anime, but still follows Luna around.

When Geo first went to school, he was jealous of Luna showing Geo around. When Taurus attacked Omega-Xis, he coincidentally found Bud and forced an EM-Wave Change. Fortunately, Luna's comments left him unguarded and Taurus Fire was defeated, leaving Bud no memory of what happened.

Bud, along with Zack and Luna, saw with their own eyes that Geo is Mega Man and the existence of Omega-Xis. However, only Luna refused to believe it, until the end of the Tribe series, and even then only to herself.

Bud encounters a gang of street thugs who decided to bully him and an innocent puppy. Afterwards, Bud decided he wanted to protect the puppy and get payback at the bullies, drawing Taurus to him. Taurus tricked him once again and merged with him, turning into Taurus Fire. He got revenge with the bullies, yet when Mega Man appeared, he was defeated. He later continues to be dragged into situations caused by the FM-ians, and becomes friends with Geo. 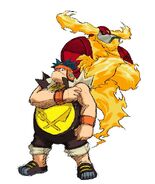 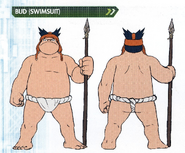 Bud and Zack in Jr. High depicted by Tokiko Nakashima 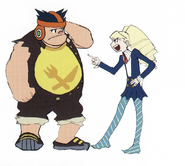 Ushijima Gonta and Ox Fire in Shooting Star Rockman 3 (manga).
Add a photo to this gallery

Retrieved from "https://megaman.fandom.com/wiki/Bud_Bison?oldid=323914"
Community content is available under CC-BY-SA unless otherwise noted.