Burble Hekelot (バーブル・へケロット, Burble Hekelot) is a boss from Mega Man Zero 2. Burble is a Mutos Reploid based on the Egyptian frog-headed goddess of birth, Heqet. Burble Hekelot was formerly a member of Phantom's Cutting Shadow Squadron, and after Phantom's death, he was assigned to Sage Harpuia's Strong Air Battalion. Burble doesn't get along with Hyleg Ourobockle, who was also part of Phantom's army. He frequently says "kero," which is Japanese for "ribbit." 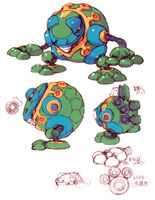 Early concept art.
Add a photo to this gallery
Retrieved from "https://megaman.fandom.com/wiki/Burble_Hekelot?oldid=320351"
Community content is available under CC-BY-SA unless otherwise noted.