"This is no ordinary riot. This is revenge! Revenge for all the Reploids you labeled Maverick and threw onto this scrap heap!"
―Burn Rooster, Mega Man X8

Rooster has high resistance to heat and worked at a borderland waste disposal center that harnesses the heat of a volcano to incinerate garbage, including retired Mavericks. Unhappy with his work, he became a Maverick and caused an uprising in the disposal center. When the Maverick Hunters first encounter him, he's kicking a machine in the back of the room (this might be what causes the lava to rise after his defeat).

After Burn Rooster's defeat, the place begins to flood with lava. In order to finish the level, the player must beat the "flood" in a race to the top, and grab the large Metal there to end the stage (this kind of Metal is usually obtained by defeating bosses in Mega Man X8).

Burn Rooster is an orange Reploid with a design reminiscent of a rooster. This is evoked in his beak, his clawed feet, the comb-like plumes of fire on his head, and the wattle-like canisters near his neck. His shoulderpads also extended behind his body, similar to wings.

Burn Rooster is a fittingly hot-headed individual. He refers to the disposal center as a Reploid graveyard, and wants revenge for all the Reploids that he believed were wrongfully labeled Maverick and scrapped in the name of justice. Therefore, he's willing to pay the price of being used by Sigma, as implied in the dialogue between him and X.

Burn Rooster attacks with his own versions of Melt Creeper and Flame Burner. He will also jump through the air and use his version of the Enkoujin, the Enkoukyaku. If he hits a wall with this technique, he will bounce from wall to wall until he hits the ground. After a good portion of his health is gone, he'll return to the background for a brief moment and activate the machine, causing the floor segments to rise and fall, limiting the player's mobility (ironically, this can also interfere with Rooster's own attacks). In Overdrive, he will breath a pillar of flame on the floor section in front of each wall in the arena. These flame pillars rise, covering the walls, and stay for the remainder of the battle. He's weak to ice, so hit him with the weapons obtained from Avalanche Yeti.

Occasionally, Rooster will spawn a fiery blue aura around his body, which will increase the power of his attacks. Rooster can be knocked out of this state if he is attacked enough times, although he can still continually power up to said state again.

Alia: The target is highly resistant to heat and has flame based weapon systems. The key to this battle will be in figuring out a way to keep the flames at bay.

Layer: This target is resistant to heat and uses fire weapons. It seems to possess the ability to power up its own abilities at will. Use barrier breaking attacks to cancel the enemy's power up techniques. Good luck.

X: It's the borderline waste disposal center. Where garbage is pressurized and burned... Why have you started a riot? What’s going on here?

Burn Rooster: This is no ordinary riot. This is revenge! Revenge for all the Reploids you labeled Maverick and threw onto this scrap heap!

X: Mavericks bring only disaster and destruction! We have no choice but to stop them!

Burn Rooster: This is what you mean when you speak of justice? It's you who should be scrapped! There's no place for Reploids like you in the new world we will create!

Burn Rooster: Do you know what this place is, Zero?

Zero: The waste disposal center... After I'm through slicing and dicing, this is where I'll toss what's left of you.

Burn Rooster: Hmpf. All I'm doing is listening to the cries of pain... The cries of all the Reploids you've sent here because you decided they were Mavericks.

Zero: If you can hear all that, I guess that means you're a Maverick too, huh?

Burn Rooster: Ha! You'll realize soon enough who's right and who's wrong in this struggle.

Burn Rooster: Know where you are, chum?

Axl: The name's Axl, and I'm no chum of yours. Anyway, this is the waste disposal center...

Burn Rooster: It's so much more than that. It's the graveyard of all the Reploids deemed Maverick.

Burn Rooster: This is what you mean when you speak about justice? It's you who should be scrapped! There's no place for Reploids like you in the new world we will create!

X: Burn Rooster, why have you started a riot? Is Sigma controlling you?

X: What does he plan to do? You know, he's just using you. Nothing more.

Burn Rooster: Using me? If that's the price I have to pay to bring about the new world, so be it!

Zero: Why have you started a riot? Is this Sigma's doing?

Burn Rooster: Can't you hear them, Zero? The cries of woe from those Reploids discarded in the name of justice?

Zero: Woe? Give me a break!

Burn Rooster: You won't mock me when the new world becomes a reality!

Axl: Why did you start this riot? Are you being controlled by Sigma?

Burn Rooster: I won't let you get in the way of our new world!

Burn Rooster was one of the numerous Mavericks copied by Sigma-1 to serve him as an army in battling the Freedom Fighters, Mega Man and his fellow Robot Masters, the Maverick Hunters, and the members of Team Sticks. While he and his fellow Mavericks help a massive advantage in numbers, they were surprised by the arrival of the heroes of Street Fighter, with Chun-Li dealing Burn Rooster a heavy blow with Spinning Bird Kick and finishing him with her Hyakuretsukyaku. 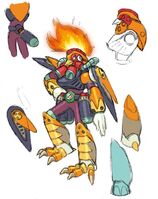 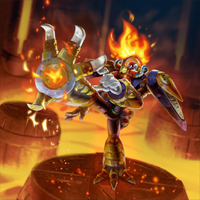 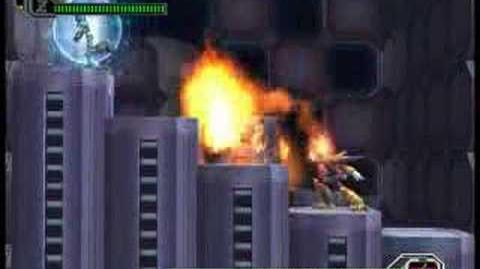 Megaman X8 Boss Burn Rooster Hard mode no wall no damage
X vs. Burn Rooster in the Gateway
Add a photo to this gallery

Retrieved from "https://megaman.fandom.com/wiki/Burn_Rooster?oldid=354842"
Community content is available under CC-BY-SA unless otherwise noted.