Burst Man (バーストマン, Bāsutoman) is a Robot Master from Mega Man 7 that was originally created to guard a chemical plant in Edo City, but was stolen and modified for combat by Dr. Wily. His body has several explosives and soapy substances (much to Turbo Man's dismay), which he can use to attack by encasing enemies in bubbles or using the Danger Wrap, a bomb encased in a bubble. Because of the liquid substances in his body, he is vulnerable to sudden changes in temperature. He is weak to Freeze Cracker and Scorch Wheel, and drops several bombs when hit by them.

An optimistic and enthusiastic festival-goer who tends to be restless at times, Burst Man loves to not only look at amazing and remarkable fireworks, but also to shoot his own bombs out as fireworks as well. He serves as a party director for many festivals and helps out from time to time, though he usually doesn't take various situations seriously due to his happy-go-lucky attitude and is also cowardly as well when it comes to battle. Burst Man enjoys hot baths and nightlong binges while disliking steady efforts.

Burst Man is one of the initial four Robot Masters that Dr. Wily had sealed away in the event of his arrest. After helping to break Wily out of prison at the start of the game, he was later defeated by Mega Man in a chemical plant, with Mega Man obtaining his weapon. He is later fought again in the Wily Castle.

Burst Man first appears along with Bubble Man and Stone Man to challenge Rockman's party atop a broken bridge. He then appears in Northwest Africa's Magma Inferno, joining Fire Man as one of Sagittarius' guards.

Before the battle, the player should know that there are two hazards in his room: the instant-death spikes on the ceiling and the walls which make Mega Man bounce through the room. Burst Man has two attacks: his first attack involves in getting out a bubble wand and shooting three yellow bubbles that make Mega Man bounce backwards and towards the walls, then planting his cannon on the floor and making big bubbles rise from where Mega Man is standing. The yellow bubbles can be destroyed with the Mega Buster, and then the player should move around the room to avoid being carried by the bubbles to the spikes. His second attack involves in shooting three Danger Wraps -which are bubble-encased bombs- and then jumping high. The bubble-encased bombs chase Mega Man and encase him, carrying him to the ceiling and killing him. They are avoided by jumping on them when they are low enough, which will make them rise and pop on the ceiling, dropping the stray bomb, however. The bomb will explode after a short time. If Mega Man gets caught in a Danger Wrap, the player can escape from the bubble by either shooting it rapidly or using Junk Shield, which deals lots of damage. If Mega Man is running out of space, the player should slide below Burst Man if he jumps to regain space.

His weaknesses are the Scorch Wheel and the Freeze Cracker, the former being more recommended due to its ability to pierce through the yellow bubbles and destroying them, and still making it to hit Burst Man. Charged shots are also a good option, and also pierce and destroy the yellow bubbles. Any of these options will make Burst Man flinch backwards and drop four bombs, making him attack back with the Danger Wrap. The Scorch Wheel always defeats it in seven hits, while the Freeze Cracker defeats him in seven hits with a whole shot and ten hits with a split shot. He is also immune to the Rush Super Adaptor's fist attack, even with the Hyper Rocket Buster upgrade; what's more, if it hits Burst Man, instead of damaging him, it carries a stray bomb towards Mega Man.

Displays the amount of damage in units that Burst Man will receive from each Special Weapon in Mega Man 7.

Burst Man also has a short appearance in Worlds Collide as part of Dr. Wily and Dr. Eggman's Robot Master army. He thus debuts prior to an adaptation of Mega Man 7, a fairly common occurrence in the Archie Comics series.

Burst Man took part of the Battle & Chase disguised as a Black 4 Roader. When he revealed himself alongside Junk Man to attack Mega Man, Mega Man simply ignored them as he was in a hurry, and they were unable to follow him without their vehicular disguises. Later, he fought against the white robot alongside other Wily Numbers, but they were defeated. After being repaired, they gave support in the battle against the Stardroids.

Burst Man appeared in the manga.

Back side view of Burst Man. 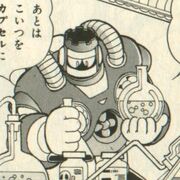 Burst Man in the Rockman 7 manga .