The Buster Shot was originally an old model of a handheld gun used by the late Resistance member Milan.  Early concept art and illustrations show that the Z Saber can be loaded into the Buster Shot as a power cell, granting the weapon the ability to be charged this way to fire Charge Shots. It is mounted onto Zero's back when not used.

When Zero awoke in the Forgotten Laboratory, he grabbed Milan's weapon in order to defend Ciel and himself against the attacking Neo Arcadian troops. Once acquired, the weapon's bullets changed from regular ammunition to energy shots, and once the Z Saber is obtained, the Buster Shot's charge attack will be available with its help. In this game, Zero must use the Buster Shot extensively to earn skill points and have access to its most powerful abilities. The Buster Shot's skill level will not increase until the Z Saber is obtained.

Zero still has to earn skill points to level up his Buster, but there are only three skill levels, with the four bullets upgrade being removed, although Zero can still fire four bullets at a time by using the X Form. Similar to the first game, the skill level will not increase during the first mission in the Sand Wilderness, only after Zero is restored in the New Resistance Base.

The Element Chips from the previous game return, and Zero can obtain EX Skill to use with them.

In Mega Man Zero 3 and 4, Zero no longer needs to earn skill points to level up his Buster, as he starts off with all his normal abilities from the previous game.  This is also the last game where the Element Chips are used. In Mega Man Zero 3, Zero can fire four bullets by using the Hacker Cyber-elf Shuthas. It is also possible to modify the appearance of Buster Shot's bullets with Mod Cards.

With the Element Chips removed, Zero only needs to earn the EX Skills from the game's bosses. 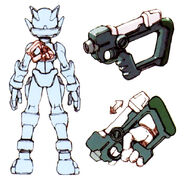 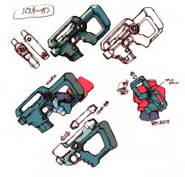 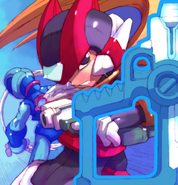 Card artwork
Add a photo to this gallery

Retrieved from "https://megaman.fandom.com/wiki/Buster_Shot?oldid=355267"
Community content is available under CC-BY-SA unless otherwise noted.