"N-Nobody... can just beat the crab outta me...! I'll be waiting for a re-match!"
―Cancer Bubble, Mega Man Star Force

Cancer Bubble (キャンサー・バブル, Cancer Bubble) is the EM Wave Change of the characters Claud Pincer and Cancer from the Mega Man Star Force series. Cancer Bubble has a habit of ending most of his sentences with "*snip*" and variations of it ("-buku" in Japan, an onomatopoeia for a bursting bubble).

Cancer Bubble appears as an optional boss. Claud Pincer, his human form, is found in the Big Wave Battle Card shop. His EM form can be fought at AMAKEN.

Cancer Bubble returns again as an optional boss. Claud once again shows up in the Big Wave shop and must be talked to fight his EM form, which appears on the Bunny Slopes ER at Grizzly Peak. His attack pattern has not changed much since the previous game. Fighting him at least once grants Mega Man an ability that modifies his Charge Shot.

Cancer Bubble is a boss in World 5.

Cancer Bubble is an important FM-ian. He, at the end of the series and in episode 17, is the leader of most of the FM-ians; with the fake Andromeda Key, he unsuccessfully tries to revive Andromeda. Cancer Bubble is a devoted fan of Sonia Sky, and is also one of only two FM-ians spared from Gemini's deletion rampage to fill the real Andromeda Key, the other being Harp (Lyra).

Cancer Bubble appears as Sonia's assistant, often attempting to help her deal with matters while she is gone. He is more of a comic relief character, as his attempts to assist Sonia often fail humorously, and he fails badly in battle. 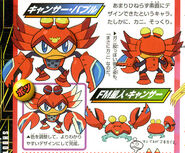 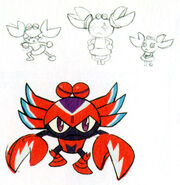