Canidae is the biological family of carnivorous and omnivorous mammals that includes domestic dogs, wolves, and foxes.

Note that this page only contains real (or realistic. See Legion.) canids. Robots, programs, and others based on canids, such as Friender, Patrol Dog, Garm, Karumuna Bash, Rush, and Wolf, are not included here.

Mega Man is shown saving a dog in one of the flashbacks from the ending.

A dog appears in Roll's ending.

There is a blue Reploid dog named Canis in Area C that belongs to Arcia. In Area G, Allen and his dog Bosch are in danger and can be rescued.

There is also an artwork where Vent is surprised by a dog's bark, almost dropping the boxes he carried, and Girouette laughs at the situation. That dog never appeared in the game itself.

Dogs appear in Ryship Island, and will scare Servbots that approach them.

Kattelox Island has some dogs.

Paprika (パプリカ, Papurika) is a dog that belongs to Jim's sister. Early in the game, Jim asks his sister to let him take Paprika with him, and he sends Paprika to chase Tron Bonne. Mega Man Volnutt tries to help Tron Bonne, having the option to talk with Paprika to calm him down or kick him away from her, the latter being possible only in Japanese versions. Paprika will disappear for some time after this event, but will eventually return to his owner. The way Paprika acts will be different depending of the player's actions. If Mega Man talked with Paprika, it will be happy and playful, and Mega Man will be able to understand what he says near the end of the game. If Mega Man kicked Paprika, it will be sad and fears Mega Man.

A fox appears in an abandoned building in the Calinca tundra. Maria's daughter named the fox Kon (コン, Kon) and is concerned when it disappears after the building is destroyed, but Kon reappears when the Gemeinschaft is destroyed. When Joe leaves Calinca with Maria and her daughter, the fox disappears, implying that Maria's daughter took Kon with her.

The protagonist Kevin has a dog named Duke that appears in all episodes. In the episode A Tale of Two Dogs, Kevin and Mega Man have a mild competition to see which dog is better, Duke or Rush.

Xander Payne had a dog that he had to euthanize by shooting when it got caught in an accident. When Xander returned in time, he attempted to avoid this event, without success.

In the first chapter, the Maverick Pierrot killed a dog named Patrasche (パトラッシュ, Patrasche) while he tried to protect his owner. After Pierrot's defeat, X and Zero saw his owner crying over his death, and Zero asks why humans do something as useless as crying. When he looks back to his partner, he sees X crying. X then comforts Patrasche's owner. 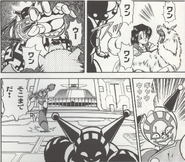 Patrasche(Killed by Maverick Pierrot)
Add a photo to this gallery

Retrieved from "https://megaman.fandom.com/wiki/Canidae?oldid=303106"
Community content is available under CC-BY-SA unless otherwise noted.