Cannon (ホウダイ, Houdai) is an enemy from the original Mega Man series. When a Cannon is inert, a metallic hatch covers its barrel. If a Cannon senses an enemy, its hatch will raise and extend a barrel that launches a large cannonball. They are only vulnerable to attacks while the barrel is exposed, being its weak spot.

Cannons are mostly found in Needle Man's stage, both the normal version and when Doc Robot appears.

Cannons are named Shield Cannons and now have eyes and different colors, but their pattern remains the same. They only appear in Challenge mode stages, and stages created with the Construction Mode.

Cannons appear as enemies in the "Mega Man a" minigame.

Amount of shots/hits from Special Weapons it takes to destroy a Cannon. 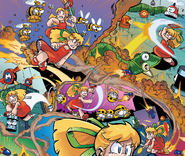 Retrieved from "https://megaman.fandom.com/wiki/Cannon?oldid=292051"
Community content is available under CC-BY-SA unless otherwise noted.