Generates a C/S barrier, lasts for one hit from each type.

Cannon Driver (キャノンドライバー, Kyanon Doraibā) is a large, bipedal combat Mechaniloid from the Mega Man X series that is used to defend bases. It chases intruders to intercept them with two powerful 200mm cannons equipped on its front, firing them alternately, and homing missiles.[1] Excluding its Mega Man X: Command Mission redesign, in all of its appearances Cannon Driver is a stationary enemy, never using its legs to walk nor attacking with homing missiles.

Cannon Driver is the first enemy X encounters in the Opening Stage. By jumping out of his Ride Chaser and letting it collide with that guarding Cannon Driver, X is able to cut off its legs and severely damage its upper half. On that first encounter, it only attacks with its remaining cannon, and can be easily destroyed with the X-Buster.

On later stages, they attack by alternately throwing cannonballs from its two cannons. They can be easily destroyed with the Magnet Mine or Spin Wheel, but otherwise the player may just jump over or dash under the lower cannonball, and let the higher one pass straight through. They usually appear guarding the gates leading to the boss of that stage, most notably in Wheel Gator's and Morph Moth's stages.

Cannon Drivers appear in recreations of Wheel Gator's and Morph Moth's stages. They have the same behavior from Mega Man X2.

Their appearance looks closer to the cut-in-half version from Mega Man X2 Opening Stage, but with the full upper half intact, including the lower cannon. Despite not having legs, they act exactly like their legged counterparts. It should be also noted that the ones that appear inside the Opening Stage base are able to respawn while still on screen, is a similar fashion to the Nightmare Insect from Mega Man X6.

Cannon Driver is an enemy that only appears in Far East HQ. It has the unique feature of having a shield that defends against both Shot and Combat attacks until struck by one attack type, upon which it becomes more vulnerable to that attack type until its next turn when it regenerates the shield. They also have a 1% chance of dropping the X Buster MKIII upon defeat.

It also has a figure that can be seen in the Sky Room after being obtained.

Cannon Driver appeared as an unit card in TEPPEN.

A Cannon Driver appears in the Rockman X2 manga trying to defend the factory, losing its legs when X jumps from his Ride Chaser and then being destroyed by X. Another is seen waiting for Zero and later tries to take him down. 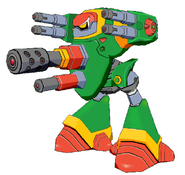 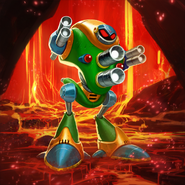 Retrieved from "https://megaman.fandom.com/wiki/Cannon_Driver?oldid=329384"
Community content is available under CC-BY-SA unless otherwise noted.