Cannopeller (キャノペラ, Kyanopera) is a flying cannon in Mega Man 6. It first appears in Wind Man's stage, but appears again in some of the final stages. It launches large balls that descend in a parabolic fashion, that explode when they hit the floor or wall. Besides Wind Man's stage, they also appear in Mr. X Stages 1 and 3, and Wily Castle 1.

Cannopeller II is a new and improved version of the Cannopeller that appears in Mega Man 11. It's similar to its predecessor, but the bombs it shoots fly straight ahead, making them somewhat easier to dodge than the ones launched by the original Cannopeller. Cannopeller IIs make their only appearance in Bounce Man's stage. 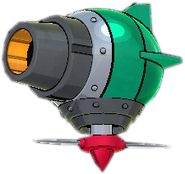 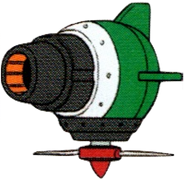