Canodumb (キャノーダム, Kyanōdamu) is a virus in the Mega Man Battle Network series made up of a cannon on a base. These viruses cannot move, but they attack when MegaMan moves into the same column as them.

The Cannon series of Battle Chips can be obtained from Canodumb viruses. The Cannon family is in every Mega Man Battle Network game, despite the fact that the virus shown in the chip doesn't appear consistently, unlike Mettaur (however, Mettaurs often change variety in their chips).

Canodumb had short appearances in the anime MegaMan NT Warrior. When the Cannon Battle Chip is used in the anime, it can be used either as a cannon in the NetNavi's arm or to summon a Canodumb to assist in the battle. 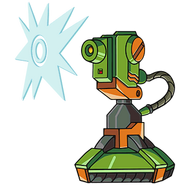 Canodumb in Dragon Poker
Add a photo to this gallery
Retrieved from "https://megaman.fandom.com/wiki/Canodumb?oldid=336644"
Community content is available under CC-BY-SA unless otherwise noted.