A capsule (カプセル, capsule) is a type of device in the Mega Man franchise that is mainly used to keep a Reploid inside for maintenance or other purposes. Some teleportation devices are also shaped like capsules.

The Light Capsules are capsules that Doctor Thomas Light created and hid around the world. They contain a hologram of Dr. Light and can be used to give Armor Parts or other upgrades to X.

The Journal of Dr. Cain mentions that Dr. Cain found X inside a 14 meters high and 8 meters wide capsule in the ruins from Dr. Light's Laboratory. Dr. Light sealed X inside the capsule to check the reliability of his systems for 30 years.

The capsule is not seen in the original game, but appears in the remake Mega Man Maverick Hunter X and in other media. In the remake it is shown to have housed X while Dr. Light built him. In the Mega Man comic book series by Archie Comics, X's capsule has the same appearance as the Light Capsules.

In Sigma's hideout, Vile locked Zero inside a capsule that has Sigma's mark on the lower part. After X is captured, Zero manages to break free and jumps on Vile, detonating himself to take the Maverick with him, but only destroyed Vile's Ride Armor.

This capsule also appears in Mega Man Zero 3 as one of the modifications for the New Resistance Base's elevator.

The final Zero Space stage shows two capsules in the background from Sigma's room. They presumably represent the capsules where X and Zero were kept before awakening in 21XX.

In Zero's ending, he is sealed inside a capsule to be analyzed.

Grey was found by two Hunters inside a capsule in a Mysterious Lab. The lab also housed the capsules used by Prometheus and Pandora.

The game's gacha is represented as a capsule, having a design similar to the one in Mega Man ZX Advent. 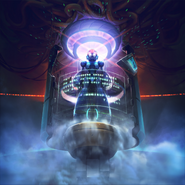 X's capsule in the TEPPEN card Hope for the Future.

Zero before being sealed in a capsule in his Mega Man X6 ending.

Tower of Saviors
Community content is available under CC-BY-SA unless otherwise noted.
Advertisement