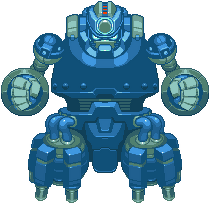 Carnage Force 0 (カルネージ・フォース０, Carnage Force 0), shortened as Carnage 0 outside Japan, is the boss of of the second opening stage in Mega Man Zero 4. Carnage Force 0 is a large flying Mechaniloid that can attack with powerful punches, launch a shower of missiles from the shoulders, and release energy rings from the head. Zero fought against Carnage 0 when he was investigating Area Zero. After Carnage 0's defeat, Zero meets Craft and the Einherjar Eight Warriors, discovering that Dr. Weil plans to destroy Area Zero.

Carnage 0, like many robots of its type, possesses the only weakness as its head. Its punches are easily evaded by moving away from its path. The missiles are a somewhat random attack as the missiles that fire off Carnage's back will fly either diagonally to the right or diagonally to the left. The easiest way to dodge this attack is to stay on the ground floor until they have all exploded. The energy rings are a tricky attack, however, due to the number of energy rings that are released. However, depending on whether Zero is high in the air or low to the ground can make it easier or harder to dodge. It is recommended that you be wall jumping or on a high level to not be hit by the attack. Alternatively, dash and wait for the energy rings to spread out wide enough to slip through to avoid damage.

Retrieved from "https://megaman.fandom.com/wiki/Carnage_Force_0?oldid=350884"
Community content is available under CC-BY-SA unless otherwise noted.