Castle Wily (ワイリーじょう, Wairī Jou, Wily Castle) is World Three's base in Mega Man Battle Network 3, located in a part of the ocean called "Demon Waters" due to its strong currents. When Tadashi discovered the base's location, Lan asks his father to tell him where it is to stop Lord Wily and Alpha, and he reluctantly agrees, warning Lan that the only way to pass by the Demon Waters is using a boat with a powerful engine to avoid being pulled under the waves and turbulent air. Lan, Chaud, Dex and Tora go to WWW's base using the boat in Beach Street. They meet with Dr. Cossak, which is injured by Bass.EXE, and Dex takes him to the boat.

Further inside the base, they face four guard robots controlled by the WWW members that can use their NetNavi abilities, and they use Full Synchro. The first robot is controlled by Rei Saiko and FlashMan.EXE, which is defeated by MegaMan.EXE and KingMan.EXE. Tora stays near the robot afterwards, and Lan can NetBattle with him.

The second robot is controlled by BubbleMan.EXE, which had not noticed them. Chaud and Lan try to run through the robot, but it blocks the path with bubbles, Chaud managing to continue while Lan tries to take care of BubbleMan, barely avoiding being trapped by his bubbles, but Dex returns and throws a boulder in the part the robot that was launching bubbles. After BubbleMan's defeat, MegaMan discovers BubbleMan wasn't the one controlling it, and fights against Sunayama and DesertMan.EXE. Dex decides to stay near the robot, saying he would only slow down Lan, and MegaMan can NetBattle against GutsMan.EXE.

Lan proceeds and find Chaud surrounded by the flames of a red robot, which is controlled by Mr. Match, FlameMan.EXE, Anetta and PlantMan.EXE. They are defeated and Chaud stays behind. Near the door where Wily is, one last robot controlled by DrillMan.EXE appears and challenges MegaMan, being defeated. Afterwards Lan faces Bass and Alpha. 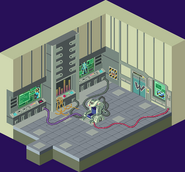 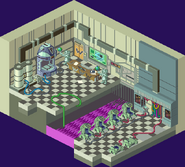 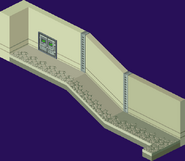 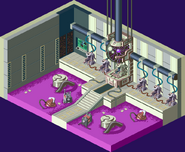 Synchron Chamber
Add a photo to this gallery

Retrieved from "https://megaman.fandom.com/wiki/Castle_Wily?oldid=235016"
Community content is available under CC-BY-SA unless otherwise noted.