Centaur Man (ケンタウロスマン, Kentaurosuman, also known as "Kentauros Man") is a Robot Master from Mega Man 6 that originally worked as a tour guide in an old archeology museum, though he was later modified for combat. His Special Weapon is the Centaur Flash - a unique system that grants Centaur Man space distortion abilities, allowing him to temporarily halt time. Whilst a powerful weapon, the main drawback is that Centaur Man has to consume a large amount of his energy to use it.

In order to complement his attacking abilities, he is also equipped with the ability to teleport over short distances, and a specially designed buster on his right arm whose shots spread on impact. He later gains the ability to fire arrow-shaped bursts of energy in multiple directions for an attack known as the Centaur Arrow.

Centaur Man is a uniquely designed Robot Master in how he walks on four legs rather than the biped designs usually employed by Dr. Wily's other creations, resembling the mythical creature his name references. This design gives him great resilience, speed and agility compared to his colleagues, but he lacks the ability to jump.

Whilst strong-willed and known for being good at making decisions quickly and effectively, Centaur Man is also something of a deep thinker, and has a tendency to dwell on his past regrets too much. Centaur Man enjoys gambling in his spare time, but perhaps owing to his horse-like design, dislikes whips.

When Centaur Man heard about the First Annual Robot Tournament, he entered the competition to restore the museum he worked on with the prize money. However, he was reprogrammed by Mr. X alongside seven other robots in the competition to help him conquer the world, and Mega Man has no choice but to fight them.

In combat, Centaur Man attacks by shooting a projectile that splits onto seven and spread out when it comes on contact with a wall. The player has to avoid it by finding an opening through the bullets and going through it. After that, he has two attacks: he may run into Mega Man to tackle him, which is avoided by jumping over him, or disappear, then reappear where Mega Man was when he disappeared and attack. He also activates the Centaur Flash to stop time sufficient enough to shoot a bullet to the wall and make the spread out bullets hit Mega Man. He is weak to Knight Man's Knight Crusher, which defeats him in seven hits.

"You can go through his legs by sliding if you can time it right. Centaur Man can't jump. Remember this!"
—Dr. Light

Centaur Man is one of the six bosses in the "Search for Wily!" course. He uses the Centaur Arrow, an energy arrow shot diagonally up or down from his arm cannon. He also uses a shield for defense, a naginata, and has the help of Heli Metalls. He is weak to Gyro Man's Gyro Attack. His legs can be dashed under at certain times. 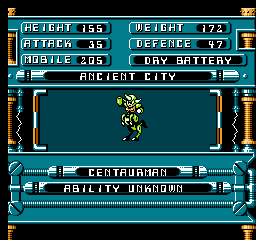 Mega Man Legacy Collection translation: A robot based on the mythical creature. Try to fight him from the center of the arena as much as possible. If you stand to the sides, you'll be hit by his spread shot.

Translation: A robot developed based on the motif of a legendary creature, he was a popular figure in an antiquities museum, but entered the robot championship to rebuild the museum with the prize money. What abilities he possesses have not been disclosed.

Centaur Man's stage, Ancient City (エンシェントシティ, Ancient City), is a high-tech area that resembles ancient ruins, mostly covered with water. Mega Man submerges in one part of the stage, which leads to an area where the water is floating above him. There are two boss rooms in the end of the stage, the top room being only accessible as Jet Mega Man.

Amount of damage in units that Centaur Man receives from each Special Weapon in Mega Man 6.

Centaur Man appeared in the story "The Greatest Enemy in History" from the manga, where he is a robot from Greece that entered in the first World Robot Championship.

He also later reappears in Mega Man Gigamix in the story "Dark Moon", where he is defeated by Saturn, and appears repaired in the end of the story "To a Shining Morrow".

Centaur Man is one of the many Robot Masters to appear in the crossover Worlds Collide, notably attempting to throw Vector the Crocodile off after Vector grabs onto his horns. Later - and still taking place prior to the comic adaptation of his game debut - he appeared briefly in issue 31. After Dr. Light spreads the formula for anti-EM field protective coating, Centaur Man was somehow treated with the solution and reactivated to help save lives, notably saving several people from a flood.

In the Rockman 6 manga, Centaur Man has a base in Innocent City (イノセントシティ, Innocent City). After Knight Man's defeat, a damaged Brain Break informs Centaur Man of what happened and Centaur Man cries. When Mega Man reaches an area with two shutters in Centaur Man's base Mega Man goes inside the lower shutter and faces the angry Centaur Man, a powerful opponent that is able to warp, split his shots and stop time. After a difficult battle, Mega Man manages to win, but the Centaur Man he defeated was a dummy robot and he is warped outside the base. Mega Man must invade the base again to fight against the real Centaur Man, this time going inside the upper shutter. Mega Man has another difficult battle, but this time he uses Knight Crusher. The Knight Crusher hits Centaur Man's helmet, breaking it and revealing Centaur Man's long hair and feminine face. Based on these physical features alone, Mega Man is led to assume that Centaur Man is a woman, and that he is in love with Knight Man. Centaur Man then continues attacking angrily, but Mega Man soon defeats him with the Knight Crusher and leaves his base in mourning.

Later, Mega Man fights against a Copy Robot with Centaur Man's form in Wily's base, and in the ending the real Centaur Man appears.

Centaur Man can be seen in one panel from the first chapter of the Rockman & Forte manga as one of the robots from the robot museum. 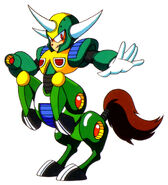 Front, side, and back view of Centaur Man.

Centaur Man in the manga Rockman 6. 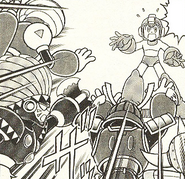 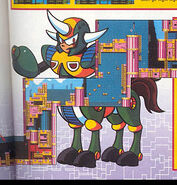