Changkey (チャンキー, Chankī), localized as Tackle Fire in some English sources, is a small robot from the original Mega Man series that is covered by flames. It appears by itself or is spawned by other enemies.

Changkey appears from the lava in Fire Man's stage in sets of three.

Besides their appearance in Fire Man's stage, they also appear in Oil Man's stage as projectiles from Hothead, where they can ignite oil.

Changkey in Mega Man Powered Up

A Changkey's body revealed after defeat.

Changkey appears as a projectile from the enemy Changkey Maker, which creates and throws them from its head.

Changkeys appear in Solar Man's stage, Wily Castle stage 4 and Special Stage 1, where four of them fly in parabolic arcs from one turret to another and back.

Changkey appears in Fire Man's stage, where they are invincible and just appear falling into lava.

They also appear as projectiles from Changkey Maker.

Changkey appears in the first stage of Wily Tower.

Amount of shots/hits from Special Weapons it takes to destroy a Changkey.

Mega Man Legacy Collection translation:
A small robot clad in flame. Take it out, and move on.

Changkey R (チャンキーＲ, Chankī R) is a revised version of Changkey. Not much has changed about it compared to its first appearance, with three of them appearing from a fiery pit and falling. They only appear in one section from the Opening Stage of Mega Man & Bass.

Changkey appears as a virus in Mega Man Network Transmission. They only show up in the area "Net on Fire." When they shoot up from the lava, they float down and towards their target. 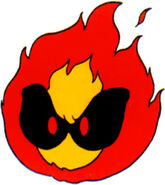 Changkey in the Mega Man comic 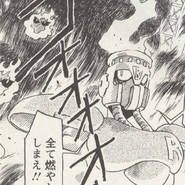 Changkey in the Rockman manga 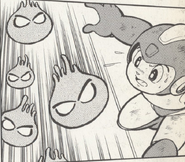 Changkey in the Rockman World manga

Changkeys and a Changkey Maker on the Variant Cover of Mega Man Issue 3.