MMKB
Register
Don't have an account?
Sign In
Advertisement
in: Articles in need of expansion, Mega Man 2 enemies, Mega Man: Powered Up enemies,
and 4 more

Changkey Maker (チャンキーメーカー, Chankī Mēkā), also known as Hothead in the Mega Man 2 instruction manual for the U.S. and in Mega Man Powered Up, is a large fire-headed robot that was originally created to light bonfires. It takes Changkeys from the head to throw at enemies.

Changkey Makers first appeared in Mega Man 2, where there are only three of them in the dark room of Quick Man's stage. When Mega Man gets close to them, the room lights up, but it becomes dark again if they are destroyed.

Amount of shots/hits from Special Weapons it takes to destroy a Changkey Maker.

Changkey Maker appears briefly in the manga Rockman: Dr. Wily no Inbou, Rockman World, and Rock'n Game Boy. One also appears on the Variant Cover of Mega Man Issue 3 in its Mega Man: Powered Up design. 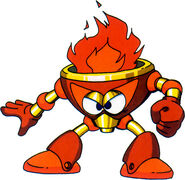 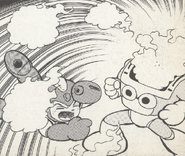 The Changkey Maker with 2 Changkeys on the Variant Cover of Mega Man Issue 3.