Chaos Emeralds (カオスエメラルド, Kaosu Emerarudo) are a set of seven emeralds containing infinite power that originated from Sonic the Hedgehog's dimension. They come in seven colors, being green, red, blue, yellow, purple, cyan, and grey in Archie Comics' Sonic the Hedgehog and Sonic Universe. They can be neutralized by the Master Emerald.

Note: This section covers only their appearance in the comics.

After the events of the first Genesis Wave (pre-Super Genesis Wave, after reality changed it was the events from Sonic Generations that caused it[1]), the Blue Chaos Emerald somehow ended up transported to the Amazon in Earth 20XX, Mega Man's realm. Flash Man, a Robot Master on patrol in the area, uncovered it near the Lanfront Ruins. He then brought it back to his master, Dr. Wily, and reported his findings while the latter argued with Ra Moon about his desire to create a Met with a rice cooker function. Wily initially thought it was a sapphire, although Flash Man replied that a spectral analysis on the gem indicated it was a beryl, with Wily commenting that it may be an aquamarine and that he isn't a geologist anyway. Wily tried to have it analyzed due to Ra Moon commenting that it emanated a great power. He initially thought it was a new Energy Element, although the power output caused the scanner to blind Wily and Flash Man. The Chaos Emerald allowed Wily to get into Dr. Eggman's transmission, who had been tracking down its location since its disappearance, and then the two doctors formed an alliance, using the Chaos Emerald to create the Skull Egg Zone.

Upon creating the Wily Egg and using a second Genesis Wave to rewrite reality not only on Mobius, but also in Mega Man's dimension, the two doctors proceeded to locate the remaining Chaos Emeralds, which scattered between the two dimensions after the alterations, obtaining the red, yellow, grey, and purple Emeralds. The Roboticized Masters Knuckles Man, Rose Woman, Shadow Man, and Tails Man, alongside Metal Sonic, were later dispatched to Mega Man's dimension to rob the cyan Chaos Emerald in Mega City's first national bank. They met some resistance against Mega Man and Proto Man, although they ultimately escaped due to Metal Sonic's interference. The Roboticized Masters, save for Tails Man, later returned to the Skull Egg Zone to report the success of their retrieval of the Chaos Emerald while Wily and Eggman watched Sonic the Hedgehog and Mega Man fight each other. Later, Silver Man and Blaze Woman returned with the last Chaos Emerald, the green Emerald.

When the doctors admitted they already had all seven Chaos Emeralds, Tails reacted with horror, although Mega Man was unfamiliar with them, causing Sonic to explain that they were equivalent to Mega Man's realm's most powerful energy source (Energy Elements) times a billion. They then used it to power the Genesis Wave Generator in order to become demigods of time and space. When Knuckles and Proto Man failed to stop them from supercharging the Genesis Wave Generator, Knuckles lamented not letting Eggman and Wily take the Master Emerald, due to his otherwise neutralizing the Chaos Emeralds if he had. Later, Sonic and Mega Man (the latter via the Rush Super Adaptor) then held the Chaos Emeralds and entered into super forms, managing to stop Wily and Eggman.

Shortly after, Eggman interfered with the Sonic's attempt to restore their world, resulting in the planet slowly falling apart and requiring the gathering of the Chaos Emeralds to prevent it. [2]

The Cyan Emerald was eventually found in the Cystal Desert Zone[3] and taken by Metal Sonic whom Sonic pursued upon his arrival. The chase for the Emerald results in them going into a Genesis Portal which takes them to the Burning Ruin Zone, though Sonic apprehends the Emerald thanks to the arrival of Silver the Hedgehog.[4]

With this acquisition, Sonic and the Freedom Fighters had 6 out of 7 of the Emeralds while Dr. Eggman had one (incidentally the Blue Emerald that resulted in his contact with Wily during Worlds Collide).[5]

Sonic arrives to the ruined Green Hill Zone through Tails' directions on a Chaos Emerald located there. He nearly falls off a cliff due to the area ending, but runs alongside the walls. While further down the cliff, he saves a small bird and instead of a Chaos Emerald, finds a shard of the Master Emerald to retrieve for Knuckles. [6] Later, when Sigma begins sending his troops to other worlds to fuse together, the Sonic cast takes stock and discovers they have all seven of the Emeralds between them, having gathered them during their adventures between the previous crossover and this one. Mega Man and Sonic used the Emeralds to obtain their super forms in the final battle against Sigma and, with a little unknown help from Eggman and Wily fiddling with the Master Engine, defeated him.

In Super Smash Bros. for Nintendo 3DS / Wii U, Sonic's Final Smash consists of him using the seven Chaos Emeralds to temporarily transform into Super Sonic. 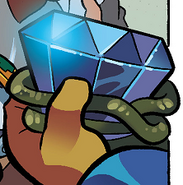 The blue Emerald that started the crossover.

The cyan Emerald sitting in a bank vault in Mega City.

Blaze Woman with the Green Emerald. 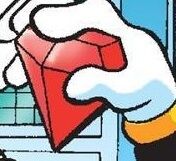 The red Emerald from Sonic's Universe.

The purple Emerald from Sonic's Universe.