"Lookit, life is short, so you gotta have fun, fun, FUN!"
―Chaotique, All Play and No Work

Chaotique (self-nicknamed Kay-Kay[1]) is an anti-heroic robot from Mega Man: Fully Charged.  She loves playing pranks and having fun, all without a care in the world and with little regard for others. She is described as Mega Man's "frenemy" in episode descriptions.

Chaotique has tan skin, blue lips, magenta eyes, and neon turquoise hair. She wears a bandage on one side of her face, which is partially covered by her hair. Her armor is red, grey, and white with colorful racing stickers all over it, and her weapons are the same color as her hair. When in battle mode, she wears a helmet with an opaque, blue, heart-shaped visor and grows hard light wings.

Chaotique is fun-loving and manipulative and is always looking for the next big prank. She isn't above framing others for her crimes for laughs.

Chaotique first appeared in All Play and No Work, where she convinced Mega Man to slack off on his hero duty and have fun with her, until she was caught framing Bert Wily for theft and faced Mega Man in combat. In the end, she left him a note saying she knew his secret identity, which appeared to worry him.

She returned and in Old School began referring to Mega Man as "Peter", indicating to Aki that she had guessed wrong about his secret identity. It appears she had mistakenly believed Peter Punkowski to be Mega Man's secret identity, as she appears shocked when he appears next to Mega Man. In the same episode, she wanted to re-create a prank called "The Big Fade Away" that was originally created by Hal.

In Panic in the Lighthouse, she was persuaded by Lord Obsidian to break into Dr. Light's lab and steal the Mega Key.  Mega Man tried to reason with her as they both struggled to avoid being destroyed by the lab's security defenses (including a heavily upgraded Junk Man), but to no avail as Chaotique tried to take a decoy Mega Key and was very badly damaged by an electrical field surrounding the decoy. Dr. Light was able to repair Chaotique using the real Mega Key, and she left the lab on friendlier terms with Mega Man.

In The Gauntlet Part I, Obsidian claims that he learned the nature of the Mega Key from Chaotique, describing her as his "agent". Aki appears upset, thinking she "betrayed" them, and Thomas says "she made her choice", but it isn't actually clear if Obsidian was telling the truth. It's never showed how he actually learned about the Key, either if he got the information from Chaotique at all, or if so with her consent (since Namagem has used Hypno Woman powers before) or if it was, whether or not Chaotique was herself or if her soul was damaged by improper use of the Key, as Light said could happen in episode 50.

Chaotique possesses super speed from the wheels on her feet. She is also skilled at manipulation, framing Bert in All Play and No Work for stealing stuff and convincing Mega Man to take the day off.  In combat, she uses her speed and spinning to her advantage, successfully dodging and deflecting attacks from the Ice Man, Air Man, and Cut Man schematics. She's also able to dislodge her left hand to reveal a hidden arm cannon akin to Mega Man's Mega Buster.

Chaotique is French for chaotic, denoting the character’s personality. 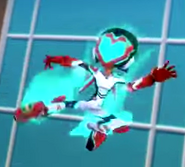 Chaotique in her battle mode. 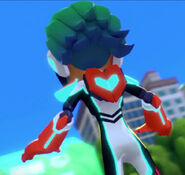 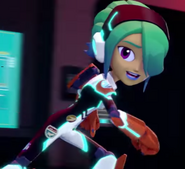