Charge Man (チャージマン, Chājiman) is a Robot Master from Mega Man 5. His design is based on old steam locomotives, which is used as camouflage by him to make shipments to areas occupied by Dr. Wily. Charge Man is unique in that his system is powered by coal and water, hence his train-like appearance, but as a drawback it increases his operating costs exponentially. Despite his antiquated power source, he is a considerably strong robot, attacking by charging into opponents at full speed. Mega Man uses this attack as the Charge Kick. Charge Man is also able to launch flaming pieces of coal from his smokestack.

Despite having a bellicose attitude and being quick to quarrel, Charge Man has both a straightforward personality and a one-track mind. In his spare time, he likes boasting about old stories, and he dislikes trendy fashions, railway signs, and things written in Katakana.

In Mega Man 5 and Mega Man IV, Charge Man walks in an attempt to touch Mega Man and damage him. He can be avoided just by timing a jump. He can also throw coal from his chimney so they fall in a random position, being invincible while doing that. The coal is avoided by moving out of the way if the coal is about to fall on Mega Man. He can also attack by using the Charge Kick to tackle Mega Man, which must be avoided by timing a jump so he fails. He is also invincible while doing his charge attack.

His weakness is the Power Stone, but it is very difficult to hit him with it. The best time to use it is when he comes walking at Mega Man while looking at him, and when he gets near him, then using it. However, he still is invincible while doing the charge attack and while shooting coal if struck with it. It defeats him in seven hits. To use Power Stone faster, pause the game after it hits Charge Man to make the boulders disappear and attack again. The Mega Buster is also a better option, as it is easier to hit Charge Man with it. Mega Man obtains the Charge Kick after his defeat.

Mega Man Legacy Collection translation: Disguised as an old steam train. Isn't it annoying how you can only damage him when he's walking around?

Displays the amount of damage in units that Charge Man will receive from each Special Weapon in Mega Man 5.

Charge Man appeared during the Worlds Collide crossover as part of a Robot Master army that battled Mega Man's allies outside the Wily Egg. He joined a force of Robot Masters-also including Turbo Man, Metal Man, and Quick Man-in chasing Sonic the Hedgehog. However, the speedy hero soon caused a pileup by tripping Quick Man, who in turn caused his allies to crash.

In the manga, Charge Man is a combat robot powered by a steam engine. Heating, expansion, compression, and cooling concludes one cycle of a steam engine, and the temperature difference caused by the heating and cooling is what determines the efficiency of the engine. Charge Man was developed to be a highly efficient engine, and he expels a high amount of heat when executing his Charge Tackle. This excess heat causes his opponent additional injury along with the physical damage caused by the Charge Tackle, and the temperature is so extreme that it can even negate incoming attacks.

Charge Man first appeared in the story "Holiday of Soldiers", where the eight Robot Masters from Mega Man 5 have part-time jobs at an amusement park to obtain money for Wily. He operates the train ride.

During the Stardroid invasion of Earth in Mega Man Gigamix, Charge Man was tasked with providing Mega Man with a quick escape against Saturn, during which he demonstrated the use of a coalbox-like car to haul passengers in. 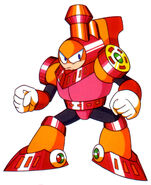 Front, side, and back view of Charge Man.

Charge Man in Mega Man: Upon a Star. 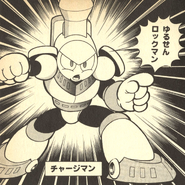 Charge Man in the Rockman 5 manga.