Chest: Akifumi Takahashi
Plum: Michiyo Terada
Ripot: Yuji Minami
Chest (チェスト, Chesuto), Plum (プラム, Puramu), and Ripot (リポット, Ripotto) are three reporter robot characters from Mega Man: Battle & Chase that cover the Battle & Chase competition. They had most of their appearances removed from the non-Japanese versions of the game. Chest gives descriptions of courses and parts to the player, Plum interviews the opponent before their first race in Grand Prix Mode, and Ripot appears after Plum's interview and to give the prize after defeating 8 racers (9 when playing with Bass). Both Plum and Ripot make comments during races, and the three have a short appearance in the special credits scene shown after completing the game with all of Dr. Wily's car parts obtained.

Chest also appears as a newscaster in the game Rockman Strategy.

The three have minor appearances in the Mega Man comic series by Archie Comics. They are members of the B&C Gazette that first appeared in Issue 1 to attend Light Labs' unveiling in Titanium Park. Plum and Ripot also appeared in Issue 23, where they swarmed Mega Man and his family and asked various questions to the Blue Bomber just as they were about to leave from Light Labs. Afterwards Plum and Ripot were part of a crowd of reporters at Light Labs to broadcast Dr. Wily's capture. They also appeared in Issue 36, reporting on Gamma's unveiling at Titanium Park, as well as the third generation robot masters' theft of the Energy Elements. Chest made an appearance in the Worlds Unite crossover on T.V. reporting on Sonic Man's rampage in Mega City in Sonic Boom #8.

The three characters appeared in the Mega Man Megamix manga series. They work at CPS, a popular national television network. CPS has a good variety of humans and robots on staff, each assigned to a role based on their specific talents and skills. Plum is a field reporter, Ripot is capable of independent flight, Chest acts as a Master of Ceremonies in the studio and also as a news anchor, and the human Charlie is another news anchor. These four are joined by many other humans of various ethnic backgrounds, as well as different types of robots. Everyone on the crew at CPS is faithful to their jobs and brave in the face of danger.

They first appear covering the Ultimate Robot Championship and Copy Mega Man's rampage in the Mega Man Megamix story The Greatest Enemy in History. Chest and Charlie have a short appearance in the story of Mega Man 9 from the Rockman 9 Arrange Soundtrack. In Mega Man Gigamix, the three appear prominently covering the Battle & Chase competition and can be seen briefly during the Stardroids incident.

They also appeared in the Rockman Battle & Chase manhua. In this manga, after having her life saved, Plum develops a crush on Mega Man. 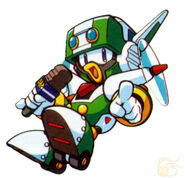 Ripot ready to start the race.

Ripot with the prize money. 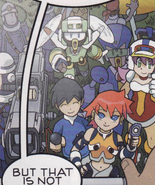 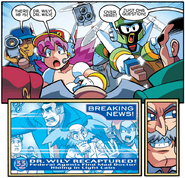 Plum and Ripot in Mega Man (Archie Comics).
Add a photo to this gallery

Retrieved from "https://megaman.fandom.com/wiki/Chest,_Plum_and_Ripot?oldid=266032"
Community content is available under CC-BY-SA unless otherwise noted.