"I've already explained to you. You could scrap my whole body, and even the smallest screw would resist you!"
―Chief R, Mega Man X: Command Mission

Chief R (アル長官, Aru Choukan) was the leader of the Resistance movement on Giga City. Chief R was held captive by Wild Jango in Central Tower when X first arrived in Giga City. After he was freed, he resumed command of Central Tower and instructed X personally on the fight against the Rebellion Army.

Chief R was a tall Reploid with the appearance of a middle-aged man, with black plating along his mouth and head made to resemble a beard. His hair was white and his helmet only covered the back of his head. His orange and white body armor was reminiscent of a trench coat, with wing-like markings that mimicked his pet Mechaniloid, O-M-8.

Chief R was a dignified leader. He refused to give in to Wild Jango's demands, and was seen as a great hero by the Reploids in Air City. He cared greatly for his subordinates as well, and was very knowledgeable of the surrounding areas of the island and its residents. R was also decisive and prudent, evident when he instructed X to rescue Nana and the captives of Tianna Camp as first order of business after control over Central Tower was re-established.

Judging from his rank, Chief R was most likely an established member of the government sent by the Federation to Giga City, perhaps something like a viceroy or assistant to thereof. At some point, he befriended Aile and became something like his mentor. When the Rebellion Army rose up and occupied Giga City, R was a core part of the Resistance which organized to fight back.

However, he was kidnapped by the Rebellion Army and held hostage in the Governor's Precinct in Central Tower. Wild Jango continually tried to get him to join the Rebellion, but R refused every time. Eventually he was rescued by X, helping the Maverick Hunter disarm a time bomb set in the tower so he could pursue Wild Jango. Upon Jango's defeat, R reassumed control of Central Tower and got the Resistance back on its feet.

Chief R then leads all of X's missions. He first deploys X and Spider to Tianna Camp to rescue the POWs held there, including Nana. He then suggests they recruit Professor Gaudile. Once X gets in contact with Colonel Redips, Chief R decides to go along with his plans and sends X to find Zero. He also agrees to have the Resistance investigate Supra-Force Metal.

However, after the defeat of Epsilon and the Rebellion Army, Chief R was gunned down while waving to a Federation airship sent to pick up X, Zero, and Axl. He died instantly upon being hit with the turrets' airship-class firepower, and his death was a motivation for X's party to confront Redips in the Far East HQ. 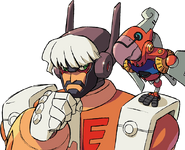 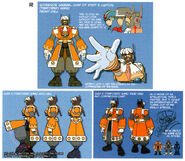