Before the events of Mega Man 10, Chill Man's primary job as an arctic natural observation robot was to stop glacial melting caused by global warming. He enjoys photography and uses photos of his experiences in the arctic to raise awareness on the Internet of the importance of nature. [1]

Chill Man runs and slides around firing his Chill Spike in order to either get you to run into the spikes or to freeze you so he can jump on you.

On Easy Mode, Chill Man only fires one Chill Spike at the ground toward you.

On Normal Mode, Chill Man fires two Chill Spikes, one toward the ground near you and one higher toward you which will hit the wall if evaded.

Chill Man appears in the Archie Comics Mega Man series, debuting in the Worlds Collide arc as part of the Robot Master army. He fared poorly during the battle, even getting the crystal around his head shattered by Knuckles the Echidna. 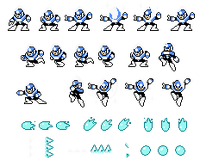 Retrieved from "https://megaman.fandom.com/wiki/Chill_Man?oldid=257785"
Community content is available under CC-BY-SA unless otherwise noted.