MMKB
Register
Don't have an account?
Sign In
Advertisement
in: Articles with hAudio microformats, Featured articles, Articles in need of expansion,
and 14 more
English

Chill Penguin, known in Japan as Icy Penguigo (アイシー・ペンギーゴ, Aishī Pengīgo), is a Reploid designed after a king penguin. Formerly a Maverick Hunter, he joins Sigma's rebellion and becomes a Maverick lieutenant.

Chill Penguin is a loud-mouthed individual who is always searching for excitement. He is rowdy and belligerent despite his small stature. He makes for a keen soldier and was an important part of Sigma's rebellion.

Chill Penguin seems to have trouble getting along with his comrades. There was a strong animosity between him and Flame Mammoth due to Mammoth being a bully toward smaller Reploids and Penguin being jealous of his large size. Additionally, Storm Owl did not get along with Chill Penguin, because someone once confused Owl with a penguin due to his short stature.[3]

Chill Penguin was designed to operate in cold temperatures, which made him a natural fit for 13th Polar Unit. However, he grew bored of working at the South Pole with little to do. This made it easy for Sigma to sway him to his side; he saw his chance to return to civilization and destroyed his own commander, escaping to join Sigma and the new Maverick army.

As part of Sigma's forces, Penguin planned to use avalanches to crush cities near mountains under tons of snow, and X had to stop him. If the player defeats him before Flame Mammoth, the lava in the latter's stage will be frozen, allowing X to walk over it with impunity.

Chill Penguin reappeared in the second stage of Sigma's Hideout as an obstacle for X along with his fellow Mavericks.

A digital reproduction of Chill Penguin is fought as a boss in Mother Computer in Normal Mode. He fights in the same way as the original version, and even has a similar stage. Alongside the other bosses from Xtreme, he reappears in Mega Man Xtreme 2's bonus Boss Attack Mode.

Chill Penguin is commonly the first boss that players target, due to his straightforward boss pattern and the Foot Parts located in his stage. His Shotgun Ice, ice sculptures, and other attacks are simple to dodge with proper dashing and wall kicking. He is weak to Fire Wave, which coats him in flames for a few seconds and quickly destroys his ice sculptures. Uniquely, he also suffers from knockback when hit with a Charge Shot.

Displays the amount of damage in units that Chill Penguin will receive from each Special Weapon in Mega Man X.

Chill Penguin is the first Maverick that X fought. He took control of a base from the 13th Polar Region Unit and was making earthquakes to create an avalanche. Marth, the commander of the base and a friend of X, was frozen by Chill Penguin. Chill Penguin has the advantage in the beginning, but is surprised by X's abilities and uses Marth as a shield. An earthquake awakened Marth and he gets freed from the ice, restraining Chill Penguin so that X could use a charge shot, killing both.

Chill Penguin was revived as "Icy Penguigo L". His color scheme now consists mainly of red, with yellow, black, white and dark blue highlights. He has two tubes connected to the devices on his back instead of one, and also has design changes to his head and shoulders. He was defeated by X.

Chill Penguin joined Sigma because he didn't like how he was treated due to his penguin design, developing a hatred for humanlike Reploids. When facing X, he is enraged because of the Hunter's humanlike appearance and is subsequently defeated by him.

Chill Penguin appears as a boss in the last stage of Chapter 4 from the story mode. He fights in the same way as his original appearance, but with an extra effect: When he jumps to the ceiling to create a blizzard, the walls wil be temporarily frozen, making the player unable to Wall Kick. The player can also obtain his boss chip to use Shotgun Ice.

Chill Penguin appeared as the boss from the summer event in 2020, having a summer design and the name Summer Penguin. He releases water balls instead of ice, and when he jumps to the ceiling, a large wave appears to push the player.

Chill Penguin's body is briefly seen in Sigma's arctic base in Sonic Universe #76. He would later be the first Maverick Reploid revived by Sigma in his base on the Lost Hex with the power from the Genesis Portals. Sigma quickly noted that his DNA Soul was not fully intact, but was appeased when he realized that the resurrected lackey retained his complete loyalty to Sigma. Many other Mavericks soon followed, forming a massive army that Sigma employed against the heroes who opposed him. 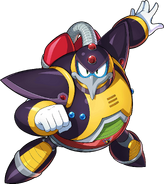 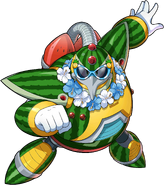 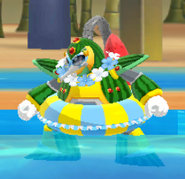 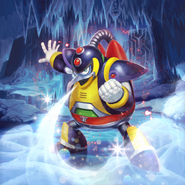 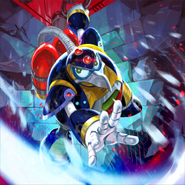 Chill Penguin in Tower of Saviors.